According to the United States Census Bureau, the city has a total area of 7.5 square miles (19.3 km²), all of it land. 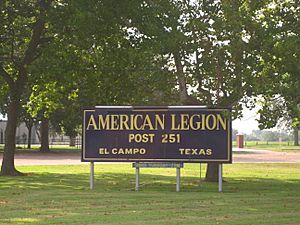 The climate in this area is characterized by hot, humid summers and generally mild to cool winters. According to the Köppen Climate Classification system, El Campo has a humid subtropical climate, abbreviated "Cfa" on climate maps.

Education in the city of El Campo is provided by the El Campo Independent School District and a number of private schools.

All content from Kiddle encyclopedia articles (including the article images and facts) can be freely used under Attribution-ShareAlike license, unless stated otherwise. Cite this article:
El Campo, Texas Facts for Kids. Kiddle Encyclopedia.