Prior to the 2010 census, this CDP was split to form parts of the new Boling and Iago CDPs.

Caney Creek meanders from northwest to southeast through the area. To the northwest of Iago, the stream can be found on the south side of Farm to Market Road 1301. Between Iago and Boling the creek crosses to the north side of the highway and loops past Boling on the north. Caney Creek eventually empties into Matagorda Bay near Sargent in Matagorda County.

The first settlement in the area was known as Floyd's Lane which was on a trail that ran from a Colorado River crossing on the west to a San Bernard River crossing on the east. A trail that ran beside Caney Creek connected the area to Wharton. Boling was founded in 1900 when the New York, Texas & Mexican Railroad built a line through the area. The settlement was named for Mary Bolling Vineyard, the then-6-year-old daughter of Robert E. Vineyard who had the town surveyed. By 1907 the town had a school, a store, a blacksmith shop, and about ten families. The school had four teachers and 104 black students. These children descended from the African-American slaves who worked the area's plantations in the pre-Civil War era. Their parents were sharecroppers or hired hands on the large land tracts which survived from the earlier time.

Boling expanded in population from 20 in 1920 to 450 in 1930 after petroleum, sulphur, and natural gas were discovered locally in mid-decade. The post office opened in 1926, dropping the second L in the town's name to change it to Boling. The town's streets were named after the oil companies that operated nearby. There are still streets named Atlantic, Gulf, Humble, Magnolia, Sinclair, Sun, and Texas. The Boling Chamber of Commerce was set up in 1935. The town's population reached 800 in 1944, dipped to 521 in 1972, and increased to 1,297 in 1990. The community's economy was hard-hit in December 1993 when the sulphur plant in Newgulf closed. In 2000 Boling's population was 1,271.

The 2010 United States Census stated that Boling-Iago had a population of 1,342 persons of whom 420 were the householder, 240 were the spouse, 585 were children, and 97 were other relatives. Out of 420 total households, there were 354 families and 66 non-families. Of the 354 family households, 228 were married couples and 126 were single women. There were 189 households with children under 18 years and 136 with seniors over 65 years. The average household size was 3.20 persons.

There were 562 children 3 years and older enrolled in school. Of these, 61 were in nursery school, 13 in kindergarten, 358 in grades 1–8, 63 in grades 9–12, and 67 in college or graduate school. Among the 693 persons who were 25 years or older, 73 had less than a 9th grade education, 100 had a high school education but did not graduate, 217 attained a high school diploma, 256 had some college courses, 23 obtained an associate degree, 24 earned a bachelor's degree, and no one had an advanced degree. Of the 803 persons who were 18 years and older, 75 were military veterans. 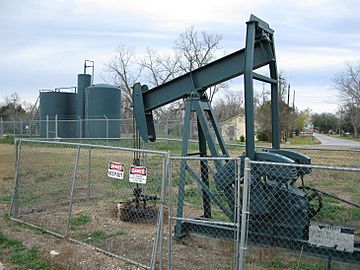 View of pump jack and oil tank on FM 1301 in Iago. Boling and Iago lie atop the Boling salt dome, a geological structure that traps oil.

The Boling salt dome is a major geological feature in the Boling-Iago area. The large oval-shaped structure is situated mostly between Boling and the San Bernard River to the northeast, with the longer axis running east-west. The caprock lies 383 feet (117 m) under the surface at the crest of the salt dome. Sulphur in water wells, natural gas seeps in the San Bernard River, and surface expressions indicated that the feature might be exploited for petroleum oil. In 1922 the first lease was bought and test wells were drilled. The first commercial well was the Texas Company's #3 Taylor in 1925; it produced about 10,000 barrels per day. In December 1937 there were 91 producing wells in the Boling Field, but by the end of 1946 many wells were played out and production dipped to 300,000 barrels per day.

In April 1947, new producing oil wells were drilled near Iago on the southwest edge of the Boling salt dome. Soon after, other successful wells were drilled on the north, northeast, and south flanks of the structure. Between 1947 and 1951, the field's production leaped to an average of 1 million barrels per year. At the end of 1952 there were 180 oil wells. In 1927, a sulphur-rich core sample was retrieved from the caprock and the production of sulphur began. From that year until 1952, about 38 million tons of sulphur were extracted from the Boling salt dome.

The climate in this area is characterized by hot, humid summers and generally mild to cool winters. According to the Köppen Climate Classification system, Boling-Iago, Texas has a humid subtropical climate, abbreviated "Cfa" on climate maps. 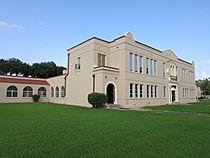 Boling-Iago is served by the Boling Independent School District. Its three schools are each located in a separate community. Boling High School is situated in Boling, Iago Junior High School can be found in Iago, and Newgulf Elementary School is located in Newgulf. In 1973, the district absorbed part of the Hungerford Independent School District. Boling High School's sports teams are known as the Bulldogs.

In the 2010 Adequate Yearly Progress (AYP) report by the Texas Education Agency (TEA), Boling ISD received a Recognized rating. According to TEA statistics, 49% of the school district's students were Hispanic, 41% were white, and 9% were African-American. The proportion of economically disadvantaged students was 50% and the special education program served 9% of all students. While the junior high and high schools received Recognized ratings, the elementary school earned a coveted Exemplary rating in 2010. There were approximately 500 students in district schools.

All content from Kiddle encyclopedia articles (including the article images and facts) can be freely used under Attribution-ShareAlike license, unless stated otherwise. Cite this article:
Boling-Iago, Texas Facts for Kids. Kiddle Encyclopedia.