The town motto, coined by James Harbert Wooten, Jr., M.D., is "City of Live Oaks and Live Folks". Columbus is the home of a Santa Claus Museum, based on the collection of Mary Elizabeth Hopkins.

The climate in this area is characterized by hot, humid summers and generally mild to cool winters. According to the Köppen climate classification system, Columbus has a humid subtropical climate, Cfa on climate maps. 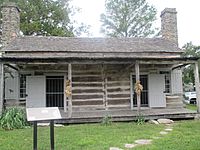 The first American settlers arrived in 1821 and believed this was the legendary site of Montezuma's Indian village. In 1822, the Mexican government issued land grants to members of Stephen F. Austin's Old Three Hundred, who included Benjamin Beason (originally spelled "Beeson") and Abram Alley. Alley's 1830s log cabin has been preserved in Columbus and is used as a tool museum.

Beason arrived in 1821, received his land grant in 1822, and settled along the Colorado River with his wife Elizabeth "Betsy" and family. By late December 1821, colonists Robert H. Kuykendall with his brother Joseph, and Daniel Gilleland arrived in the area of present-day Columbus. In 1822, Benjamin Beason began operating a ferry across the Colorado River, and the settlement became known as Beason's Ferry or Beason's Crossing. Beason also established a gristmill, gin, and a sawmill; his wife operated a boarding house.

Beason's Crossing became part of Austin's San Felipe colony in 1822, when the colony was divided into two districts by the Mexican governor José F. Trespalacios. The Mexican government granted the rights to establish a town, and the locals elected town officials. John J. Tumlinson, Sr., was elected alcalde, with Robert Kuykendall captain and Moses Morrison lieutenant. Tumlinson's land adjoined Beason's; together, they made up much of the site of present-day Columbus. Tumlinson was killed by Native Americans in 1823. In 1834, after the Tumlinson children inherited the estate, they sold land to William Dewees, who was married to Beason's daughter, Lydia. Dewees' land grant was near the site of present-day Glidden, Texas. 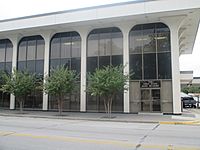 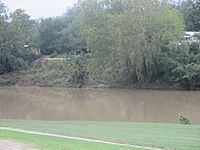 By 1836, Beason's Ferry Crossing was home to over 25 families. During the fight for Texas independence, Sam Houston and his men camped along the banks of the Colorado River near Beason's Crossing. Following the Battle of the Alamo, Santa Anna's army headed for San Jacinto, and Houston ordered that Beason's Crossing be burned during the Runaway Scrape.

Columbus was established by European Americans in 1837 after Texas achieved independence from Mexico. After the population returned following warfare, residents renamed Beason's Crossing "Columbus". Some speculate that it was named in honor of residents who migrated from Columbus, Ohio, while others believe the town was named after Christopher Columbus, who explored on behalf of Spain in the late 15th century.

The town of Columbus was platted again in 1837. The Dewees family gave land for a new school and possibly a courthouse. By 1837, the town had been re-established with two public houses, two stores, and half a dozen small dwellings. 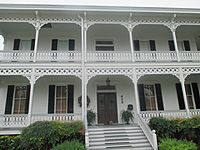 The historic Stafford-Miller House was built in 1886 for the cattleman, banker, and businessman Robert E. Stafford (1834-1890).

It was later named the seat of Colorado County, and had developed as a center of business and trade for surrounding areas. Cattle ranching was big business by the late 19th century. Some merchants and ranchers did very well, and built fine houses in the city, such as the house built by Robert E. Stafford. He supported the Stafford Opera House, now serving also as a museum and performance space. In the late 19th and early 20th centuries, it attracted touring performers and lecturers. Other notable historic homes operated today as museums are the Dilue Rose Harris House Museum, and Tate-Senftenburg-Brandon House Museum.

The Colorado County Courthouse was built in 1890, the fourth such structure in the city. It was designed in the Classical Revival and Italianate styles of architecture by noted Houston architect Eugene T. Heiner. He designed at least nine other Texas courthouses. The bell tower was damaged in a 1909 storm. The dome was added before 1939. It is listed on the National Register of Historic Places. In 2013-2014, the courthouse was being renovated and upgraded for current uses; the project included restoration of historic exterior colors. 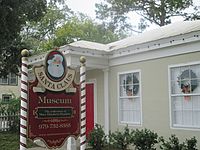 The Santa Claus Museum in Columbus

In the 20th century, the Santa Claus Museum was established in town, based on the collection of Mary Elizabeth Hopkins (d. 1990) and located in her former residence. It has become a noted tourist destination in the region. The historic Alley Log Cabin and Tool Museum is another unique site, dating to the 1830s.

All content from Kiddle encyclopedia articles (including the article images and facts) can be freely used under Attribution-ShareAlike license, unless stated otherwise. Cite this article:
Columbus, Texas Facts for Kids. Kiddle Encyclopedia.