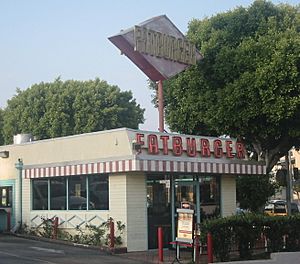 For the colloquial use of this term see Fatburger (drain obstruction)

Fatburger Inc. is an American fast casual restaurant chain. Its tagline is The Last Great Hamburger Stand. While it is a fast food restaurant, the food is cooked and made to order. Some Fatburger restaurants have liquor licenses as well as Fat Bars. Its franchise headquarters are in Beverly Hills, California. In addition to the United States, the chain operates in 19 other countries. The Fatburger menu is centered primarily on hamburgers, offering various sizes and numbers of patties, along with add-ons such as cheese, bacon and eggs. 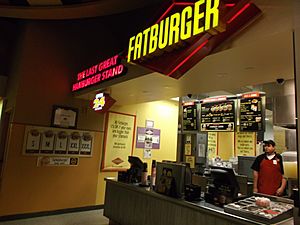 Fatburger was founded by Lovie Yancey in the neighborhood of Exposition Park in Los Angeles, California, in 1947. It was originally named "Mr. Fatburger" (on behalf of Yancey's boyfriend), until Yancey removed the "Mr." in 1952. At that time, she bought out her start-up partners and retained sole ownership of the Fatburger brand until 1990, keeping and operating the original store on Western Avenue along with the La Cienega Boulevard store (La Cienega/San Vicente).

Fatburger remained a mostly California-based chain until the late 1990s, when it began an expansion in North America. On August 15, 2003, Fog Cutter Capital Group completed a $7 million investment and financing package for the company. Fatburger operates or franchises over 150 Fatburger restaurants worldwide with over 300 more planned for future development. For several months in 2006, the company was barred from selling additional franchises in California, due to chairperson Wiederhorn's felony convictions.

In 1992, Fatburger gained national attention after being referenced in the hit song "It Was a Good Day" by rapper and actor Ice Cube. It was also referenced by The Notorious B.I.G. in the song "Going Back to Cali".

Fatburger has locations in five western states in the United States and Canada, and new locations in China, Saudi Arabia, Bahrain, Malaysia, the United Kingdom, Fiji, Indonesia, Iraq (including Iraqi Kurdistan), India, the United Arab Emirates, Kuwait, Tunisia, Macau, Pakistan, Oman, Panama, Singapore, Philippines, Qatar, and Japan. In some locations, menu changes were made to conform to local customs. It will expand into Texas, in cities like Austin, Dallas, Houston and San Antonio. In 2019, it was announced the first Texas location would be created in North Richland Hills.

Former professional basketball player Magic Johnson, through Johnson Development Corporation, was one of the owners of the parent company. Former talk show host Montel Williams co-owns several Fatburger restaurants in Colorado. Bay Area musician E-40 also had a stake in the company as a franchise owner, by opening the first San Francisco Bay Area Fatburger restaurant in Pleasant Hill, which is now closed. Actor and musician Queen Latifah also at one point partnered with Fatburger.

All content from Kiddle encyclopedia articles (including the article images and facts) can be freely used under Attribution-ShareAlike license, unless stated otherwise. Cite this article:
Fatburger Facts for Kids. Kiddle Encyclopedia.