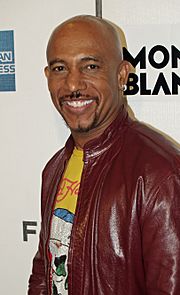 Montel Brian Anthony Williams (born July 3, 1956) is an American movie, television, voice, radio actor, activist, and talk show host who is known for being the host of his own show The Montel Williams Show. He has won an Emmy Award.

All content from Kiddle encyclopedia articles (including the article images and facts) can be freely used under Attribution-ShareAlike license, unless stated otherwise. Cite this article:
Montel Williams Facts for Kids. Kiddle Encyclopedia.