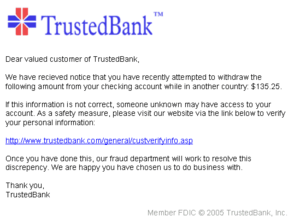 An example of a phishing email, disguised as an official email from a (fictional) bank. The sender is attempting to trick the recipient into revealing secure information by "confirming" it at the phisher's website.

Phishing is a way that criminals get sensitive information (like usernames or passwords). It is a method of social engineering. Very often, phishing is done by electronic mail. This mail appears to come from a bank or other service provider. It usually says that because of some change in the system, the users need to re-enter their usernames/passwords to confirm them. The emails usually have a link to a page that looks almost like that of the real bank.

Phishing allows criminals to get access to bank accounts, or other accounts like shopping, auction or gaming accounts. It can also be used for identity theft.

Some people who do this started using pictures of text to make it harder for anti-phishing filters to see it. This sometimes works because the filters look for words often used in phishing emails/messages. However, people have invented better filters that can still read the text using OCR (optical character recognition).

Some anti-phishing filters can even read cursive, hand-written, upside-down, distorted (for example, wavy or stretched) text, as well as writing on colored backgrounds.

All content from Kiddle encyclopedia articles (including the article images and facts) can be freely used under Attribution-ShareAlike license, unless stated otherwise. Cite this article:
Phishing Facts for Kids. Kiddle Encyclopedia.