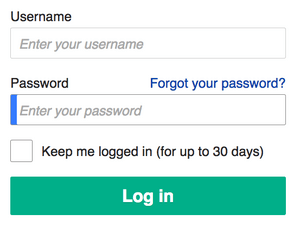 Passwords were first used in the military. This was to be able to tell who was a friend and who was an enemy when it was dark.

Other ways of verifying the identity of a person include using fingerprint scanners and face detection.

All content from Kiddle encyclopedia articles (including the article images and facts) can be freely used under Attribution-ShareAlike license, unless stated otherwise. Cite this article:
Password Facts for Kids. Kiddle Encyclopedia.