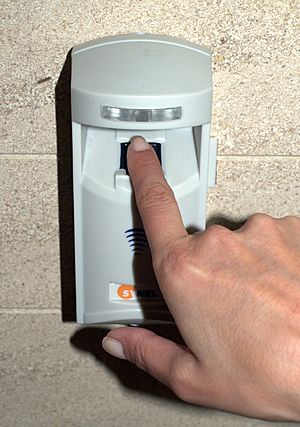 A stand-alone fingerprint scanner, such as one used at the entrance to a building

People have a pattern of ridges on their fingers. This fingerprint cannot be removed or changed. Every fingerprint is different from any other in the world. Because there are countless combinations, fingerprints are much used for identification.

They are based on the oldest technique, that consists of placing your finger on a glass surface or a prism that is illuminated by a led diode. When the ridges of fingerprints touch the surface, the light is absorbed, while between these crests a total reflection occurs. The resulting light and dark areas are recorded in an image sensor.

In practice there are some difficulties with this technique: wet and dry fingers make very different images, and the system is sensitive to dust and dirt on the surface. The unit is large and expensive. This system is also easy to cheat and if the skin is damaged, the fingerprint is not recognized correctly. The recognition of the fingerprint of older people is also difficult to do because their skin may not be elastic enough. In some circumstances this may result in false recognition. If the stored fingerprint was taken with less pressure, false acceptances may occur.

The sensor is a silicon integrated circuit with a surface that is covered by a large number of transducer elements (or pixels), with a typical resolution of 500 dpi. Each element contains two adjacent metal electrodes. The capacitance between the electrodes, which forms a feedback path for an inverting amplifier, is reduced when the finger is applied to said surface: it is further reduced when it detects ridges and less reduced when it detects the space between them.

The sensor is susceptible to electrostatic discharge. These sensors only work with normal healthy skins, they are not operative being used on skins with hard areas, calluses or scars. Moisture, grease or dust can also affect its operation.

It consists of tens of thousands of tiny pressure transducers that are mounted on the surface of the sensor. An alternative design uses switches that are closed when pressed by a ridge, but that stay open when they are under a valley. This only provides one bit of information per pixel, instead of working with a gray scale.

In this case the heat driven by the finger is detected, which is greater when there is a ridge than when there is a valley. A silicon component has been developed with a matrix of pixels called "FingerChip", that is, "finger integrated circuit", each of which is covered with a layer of pyroelectric material in which a change in temperature translates into a change in the load distribution of its surface. The image is in the gray scale that has the right quality even with the finger worn, with dirt, with grease or with humidity. The sensor has a robust protective layer and can provide a dynamic output.

Most of the sensors described have been altered in the past. To avoid this, a new operating mode has been added. Instead of simply placing your finger statically on the sensor, the finger moves slowly along it. The sensor only has a narrow sensitive area, and generates a complete sequence of images, which can be reassembled, by means of a processor, in a complete image. The benefits are improved appreciably and the elimination of any residual grease is guaranteed.

Smartphone with round fingerprint scanner

The most important use area is in access control for computers. This is especially important for laptops and PDAs. Thanks to the price falling, more and more devices are equipped with sensors. Other devices with built-in fingerprint sensors include USB hard drives, USB memory modules and card readers. They are also available in mice and keyboards.

Sensors are increasingly used to secure financial transactions and change machines for "online" banking. In the future, the owner's fingerprint will be stored securely on identity cards and credit cards and may also be used for authentication of emails using digital signatures.

Direct physical access to rooms and devices can also be ensured by coupling fingerprint sensors with door opening systems.

There are two construction forms: the stagnant and the moving fingerprint scanner. 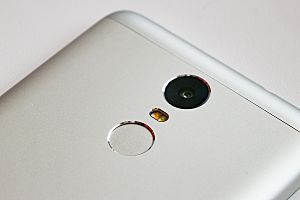 All content from Kiddle encyclopedia articles (including the article images and facts) can be freely used under Attribution-ShareAlike license, unless stated otherwise. Cite this article:
Fingerprint scanner Facts for Kids. Kiddle Encyclopedia.