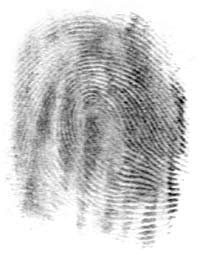 A fingerprint with ink on a piece of paper

A fingerprint is a trace of a human finger left on a surface. Human fingers have small structures on them (like mountains and valleys). These structures are unique in every human; they can be used as means of identification.

There are many different ways to take fingerprints. Forensic scientists use these techniques to identify a person.

Nowadays have been discussion about using fingerprints to identify a person also with electronic devices.

Before computerization, manual filing systems were used in large fingerprint repositories. Manual classification systems were based on the general ridge patterns of several or all fingers (such as the presence or absence of circular patterns). This allowed the filing and retrieval of paper records in large collections based on friction ridge patterns alone. The most popular systems used the pattern class of each finger to form a key (a number) to assist lookup in a filing system.

In the Henry system of classification, there are three basic fingerprint patterns: loop, whorl, and arch, which constitute 60–65%, 30–35%, and 5% of all fingerprints respectively.

Radial loops start on the thumb-side of the finger, the side closer to the radius. Whorls may also have sub-group classifications including plain whorls, accidental whorls, double loop whorls, peacock's eye, composite, and central pocket loop whorls.

Other common fingerprint patterns include the tented arch, the plain arch, and the central pocket loop.

All content from Kiddle encyclopedia articles (including the article images and facts) can be freely used under Attribution-ShareAlike license, unless stated otherwise. Cite this article:
Fingerprint Facts for Kids. Kiddle Encyclopedia.