On June 5, 2020, during the George Floyd protests, the DC Public Works Department painted the words "Black Lives Matter" in 35-foot-tall (11 m) yellow capital letters on 16th Street NW on the north of Lafayette Square, part of President's Park near the White House, with the assistance of the MuralsDC program of the DC Department of Public Works, with the DC flag accompanying the text. On the same date, the }}</ref> When announcing the renaming, she said, "Breonna Taylor, on your birthday, let us stand with determination." In a press conference, she explained, "There are people who are craving to be heard and to be seen and to have their humanity recognized. We had the opportunity to send that message loud and clear on a very important street in our city." In October 2020, the DC City Council voted to keep the name permanantly.

The naming of the street has been seen by many as not only a reaction to the protests but part of it.

Mayor Bowser's decision to rename the segment of 16th Street NW as a public gathering place, or plaza, followed DC precedent for the commemorative renaming of city streets, under the Code of the District of Columbia. 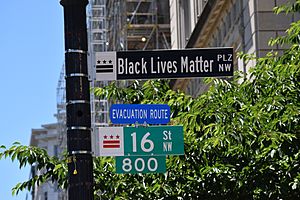 The plaza is a two-block-long section of 16th Street NW, south of K St NW, extending through I St, and north of H Street NW on the north side of President's Park on the south side of the Downtown neighborhood in Northwest D.C.. Vehicular entry is blocked by barricades on the right-hand side of the street, though emergency vehicles have access on the left side. Cross-traffic is uninterrupted on K and I streets.

The United States Park Police reacted to the public gatherers by erecting a temporary seven-foot-tall (2.1 m) chain-link security barrier on the north boundary of the park, which was used to post messages by the protesters.

A group of religious organizations, including Warriors for Christ and Special Forces of Liberty, filed a federal lawsuit on June 12, 2020 against Bowser over the renaming of the plaza. The Warriors for Christ is described by the Southern Poverty Law Center as a "anti-LGBTQ hate group". The suit contends that Black Lives Matter is a "cult for secular humanism" and a religious organization, and thus Bowser's action of renaming the plaza an endorsement of a religion violating the separation of church and state. The suit calls for the mural to be removed and the plaza to be renamed to a more secular name, as well as the display of different banners giving equal time for other groups.

All content from Kiddle encyclopedia articles (including the article images and facts) can be freely used under Attribution-ShareAlike license, unless stated otherwise. Cite this article:
Black Lives Matter Plaza Facts for Kids. Kiddle Encyclopedia.