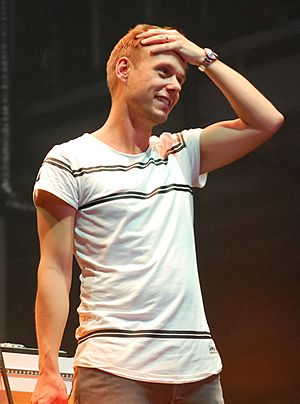 Armin van Buuren (born 25 December 1976) is a disc jockey from the Netherlands. He is the number one ranked DJ. He has won DJ Magazine's Top 100 DJs fan poll a record of 5 times. He won it 4 years in a row (2007-2010) and again in 2012. Since 2001, Van Buuren has hosted a weekly radio show called A State of Trance. The program says about 25 million people in 26 countries listen to it each week. This fact would make it one of the most listened-to radio programs in the world.

All content from Kiddle encyclopedia articles (including the article images and facts) can be freely used under Attribution-ShareAlike license, unless stated otherwise. Cite this article:
Armin van Buuren Facts for Kids. Kiddle Encyclopedia.