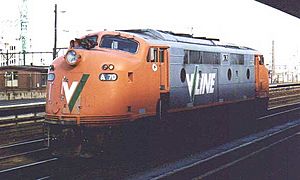 V Line locomotive A70 at Spencer Street Station, Melbourne, in 1996

Southern Cross Station is a railway station in Melbourne, Australia. It is one of five stations in the mostly underground City Loop and the main hub for V/Line's services outside Melbourne, via Bus and Train. The station was called Spencer Street Station until December 13, 2005

All content from Kiddle encyclopedia articles (including the article images and facts) can be freely used under Attribution-ShareAlike license, unless stated otherwise. Cite this article:
Southern Cross Station Facts for Kids. Kiddle Encyclopedia.