Flinders Street Station is the central railway station of the rail network of Melbourne, Australia. It is on the corner of Flinders and Swanston Streets next to the Yarra River in the middle of the city, stretching from Swanston Street to Queen Street and covering two city blocks. Each weekday, about 105,000 people and 1,500 trains use the station.

It is serviced by Metro's suburban and city loop services, and V/Line's regional services. 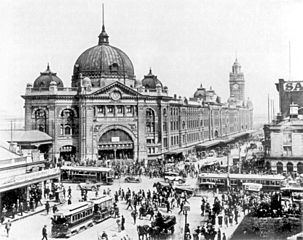 Flinders Street Station and the intersection of Flinders and Swanston Streets, 1927

The first railway station in the Flinders Street site was called Melbourne or City Terminus, and was a collection of sheds. It was completed in 1854 and was officially opened on 12 September by Sir Charles Hotham. The terminus was the first city railway station in Australia, and the opening day saw the first steam train trip in the country. It travelled to Sandridge (now Port Melbourne), over the Sandridge Bridge (which has now been redeveloped in 2006 as a pedestrian and cycle bridge across the Yarra River), travelling along the now light rail Port Melbourne line.

Melbourne's two other early central-city stations, Spencer Street Station (now Southern Cross Station) and Princes Bridge, opened in 1859. Princes Bridge was originally separated from Flinders Street, even though it was only on the opposite side of Swanston Street. Once the railway line was extended under the street to join the two, Princes Bridge slowly became amalgamated into Flinders Street. Federation Square now occupies its site.

In 1882 the government decided to build a new central passenger station to replace the existing construction. A worldwide design competition was held in 1899, with 17 entries received. The £500 first prize went to railway employees J. W. Fawcett and H. P. C. Ashworth, whose design included a giant dome and clock tower. Work began in 1901 and ended in 1910.

Flinders Street Station's platforms are numbered from north to south, with Platform No. 1 being the farthest north, and generally serve specific lines as follows.

Platforms 4 & 5: Alamein, Blackburn trains on the Belgrave and Lilydale lines (both platform 4 only), Cragieburn, Sydenham, Upfield and Werribee

Platforms 8 & 9: Sandringham and Williamstown (Peak Only) 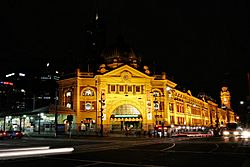 Flinders Street is currently undergoing redevelopment. It will involve cleaning and repair, as well as improving general ability for people who are disabled to move around the station.

All content from Kiddle encyclopedia articles (including the article images and facts) can be freely used under Attribution-ShareAlike license, unless stated otherwise. Cite this article:
Flinders Street Station Facts for Kids. Kiddle Encyclopedia.