The City Loop (originally called the Melbourne Underground Rail Loop or MURL) is a mostly-underground, partly surface-level and partly elevated subway and rail system around the central business district of Melbourne, Victoria, Australia.

Melbourne's 15 radial suburban railway lines feed into the Loop at its northwestern and southeastern corners. The underground section of the Loop follows La Trobe and Spring Streets along the northern and eastern edges of the CBD's street grid. 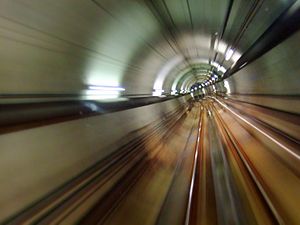 Inside a section of bored tunnel 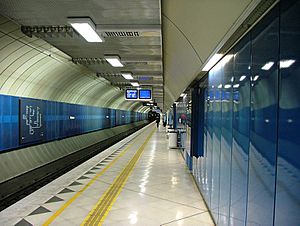 The Loop was opened gradually between 1981 and 1985. Queen Elizabeth II toured Museum station during her 1981 tour of Australia.

Two short documentary films, Loop and Action Loop, were commissioned by the MURLA to advertise the new railway to Melburnians, as well as abroad. (These videos can be downloaded from the Department of Infrastructure).

The final cost was $500 million and resulted in reversing a 30-year trend of falling suburban rail patronage.

The layout of the City Loop is effectively four balloon loops which operate one way during the morning and the other way in the afternoon.

All content from Kiddle encyclopedia articles (including the article images and facts) can be freely used under Attribution-ShareAlike license, unless stated otherwise. Cite this article:
City Loop, Melbourne Facts for Kids. Kiddle Encyclopedia.