Kids Encyclopedia Facts
Not to be confused with André Riou.

Rieu and his orchestra have turned classical and waltz music into a worldwide concert touring act. He resides in his native Maastricht.

By December 2008, Rieu had achieved his 100th platinum accreditation in Australia and by May 2011, Rieu had sold over $50 million worth of wholesale shipments of his CDs and DVDs in Australia and was the highest-selling music artist in the Australian market between 2006 and 2011.

The name Rieu is of French Huguenot origin, though both of Rieu's parents were Roman Catholic. André was born to Andries Antonie Rieu and is the third of six children. He has two older sisters (Teresia and Cilia), two younger brothers (Robert and Jean-Philippe), and a younger sister (Gaby Buirma-Rieu).

Rieu's father was conductor of the Maastricht Symphony Orchestra. Showing early promise, André began studying violin at the age of five. From a very early age, he developed a fascination with orchestra. He studied violin at the Conservatoire Royal in Liège and at the Conservatorium Maastricht, (1968–1973), studying under Jo Juda and Herman Krebbers.

From 1974 to 1977, he attended the Music Academy in Brussels, studying with André Gertler. He completed his training with the distinction "Premier Prix" from the Royal Conservatory of Brussels.

He married Marjorie Kochmann in 1975. She has been a language teacher and has written compositions. They have two sons, Marc and Pierre. 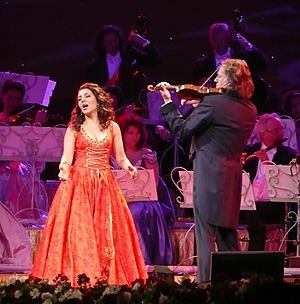 Rieu created the Johann Strauss Orchestra in 1987 and began with 12 members, giving its first concert on 1 January 1988. As of 2020, he performs with between 50 and 60 musicians. Rieu plays a 1667 Stradivarius violin.

Rieu and his orchestra have appeared throughout Europe, North and South America, Japan, and Australia. In 2008, Rieu's tour featured a full-size reproduction of Empress Sisi's Castle, the biggest stage to have gone on tour at that time.

For two weeks in 2013, one of the channels of the BSkyB group, Sky Arts 2 in the UK, was renamed as Sky Arts Rieu. Between 30 March and 14 April 2013 Sky Arts Rieu broadcast Rieu concerts and documentaries 24 hours per day.

All content from Kiddle encyclopedia articles (including the article images and facts) can be freely used under Attribution-ShareAlike license, unless stated otherwise. Cite this article:
André Rieu Facts for Kids. Kiddle Encyclopedia.