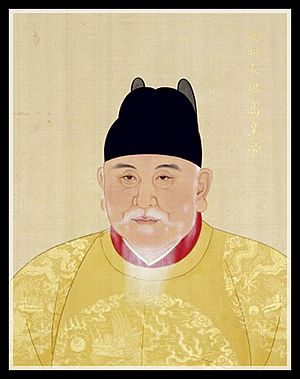 The Hongwu Emperor's real name was Zhū Chóngbā. It is written 朱重八 in Chinese writing. His given name was Chongba and his family were the Zhus, but Chinese people write their family names first. His name means "Double Eight", which is a lucky number in Chinese culture. People say his parents called him that because their ages at the time added together to make 88. He was also their eighth child.

In old China, there were many rules about names and who could use them. People used boys' real names but, when they became men at age 20, only older members of their families could call them that. Other people used a special courtesy name to be polite. When he became a man, Zhu Chongba chose the name Xīngzōng, meaning that he wanted to bring success in honor of his dead family members. This name is written 興宗 in the traditional writing used on Taiwan and Hong Kong and 兴宗 in the easier writing now used by the PRC. When he started to become a successful leader, he started to use a third name: Zhū Yuánzhāng. This name is written 朱元璋 in Chinese writing. He also sometimes used the courtesy name Guóruì, meaning "National Luckiness".

In old China, the Chinese emperors did not number their years from one place. Instead, they gave names to eras (groups of years) any time they wanted. Some emperors made 10 or more eras while they led China. Zhu Yuanzhang started his era when he took Khanbaliq (now Beijing) from the Yuan emperor Toghon Temür in 1368. He said this was the 1st year of the "Very Warlike Era", which sounds like Hóngwǔ and is written 洪武 in Chinese. He only had this one era when he was emperor, so people also called him the "Emperor of the Hongwu Era" or Hóngwǔdì (洪武帝).

When he was the emperor of China, Chinese people just called him the "Emperor". If they met him, they used very polite terms like Bìxià (陛下, "Your Highness") to speak to him. After he died, the next emperors gave him a new, long, and very polite name and called him Míng Tàizǔ (明太祖), the "Greatest Dead Family Member" of the Ming. After the Xinhai and Communist changes in government of China, people are less polite when they talk about the old emperors. They usually just call him by his everyday name Zhu Yuanzhang like a common person. In English, it's more common to talk about him as the Hongwu Emperor.

Zhu Chongba was born on October 21, 1328, during the Yuan part of China's history. His father Zhu Wusi (朱五四) or Zhu Shizhen (朱世珍) and his mother Chen Erniang were farmers near a small town called Zhongli near the Huai River in central China. Today, it's within Fengyang, Anhui. His family had so little money that they had no land themselves and needed to borrow other people's farmland. They could not feed all their children and had to give away some of them to other people.

When Zhu was 16 years old, there was no rain for a long time. Because only a little food could grow, everyone left in his family died except for Zhu and one of his brothers. Not knowing what else to do, he joined the Huangjue Buddhist temple as a monk. It did not have much money either and could not give him food for very long, so he soon left. He walked around, asking people for money or food, for about 3 years. Then he went back to Huangjue Temple and stayed there until he was 24. The other monks at the temple taught him to read and write.

People were very angry with the Yuan leaders of China at the time. They were Mongolian people, but most Chinese were Han. Many people started fighting the government. The Yuan army would stop them but hurt many people as they did. Then more people joined in fighting the government. Zhu was one of these. An army destroyed his temple and he started joining the people fighting against them in 1352. He quickly became a leader and joined his fighters with the Red Turbans. In 1356, he took Nanjing and made it the capital of his own small country. He made laws and kept his people mosty safe, so many more people left to join him. This made him even stronger.

In 1368, he took Khanbaliq (today's Beijing) and started the Ming Empire in place of the Yuan.

He died on June 24, 1398, and was followed as emperor by his grandson Zhu Yunwen, who became the Jianwen Emperor.

All content from Kiddle encyclopedia articles (including the article images and facts) can be freely used under Attribution-ShareAlike license, unless stated otherwise. Cite this article:
Hongwu Emperor Facts for Kids. Kiddle Encyclopedia.