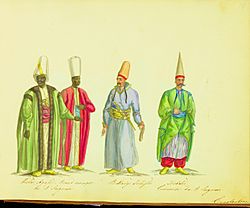 The Harem Ağası, head of the black eunuchs of the Ottoman Imperial Harem.

A eunuch was a special palace servant who was trained to protect women’s living areas and was able to focus totally on his job without being distracted by anything. The king or sultan could trust such a man to protect the queen, princesses, and their attendants.

As well as guarding women eunuchs had a lot of different functions in different cultures such as domestics, treble singers, religious specialists, government officials and military commanders.

All content from Kiddle encyclopedia articles (including the article images and facts) can be freely used under Attribution-ShareAlike license, unless stated otherwise. Cite this article:
Eunuch Facts for Kids. Kiddle Encyclopedia.