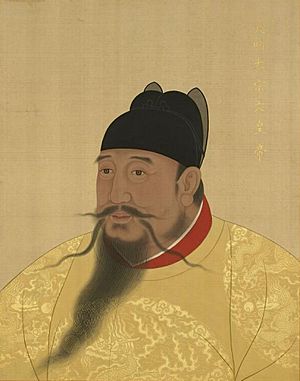 The Yongle Emperor (May 2, 1360 – August 12, 1424), known in China as Zhu Di, was the 3rd emperor of the Ming part of China's history. He was the emperor of China from 1402 to 1424. He is important because he moved China's capital to Beijing, built its Forbidden City, and sent Zheng He on trips to Indonesia, India, Arabia, and eastern Africa.

The Yongle Emperor's real name was Zhū Dì. It is written 朱棣 in Chinese writing. His given name was Di and his family were the Zhus, but Chinese people write their family names first. His name means "Japanese cherry", but in Chinese that bush or tree isn't thought of as Japanese.

In old China, the Chinese emperors did not number their years from one place. Instead, they gave names to eras (groups of years) any time they wanted. Some emperors made 10 or more eras while they led China. Zhu Di started his era the year after he took Yingtian (now Nanjing) from his nephew the Jianwen Emperor in 1402. He said this was the 1st year of the "Era of Eternal Happiness", which sounds like Yǒnglè and is written 永樂 in traditional Chinese writing and 永乐 in the easier writing now used by the PRC. He only had this one era when he was emperor, so people also called him the "Emperor of the Yongle Era" or Yǒnglèdì (永樂帝 or 永乐帝).

When he was the emperor of China, Chinese people just called him the "Emperor". If they met him, they used very polite terms like Bìxià (陛下, "Your Highness") to speak to him. After he died, the next emperors gave him a new, long, and very polite name and called him Míng Chéngzǔ (明成祖), the "Most Successful Dead Family Member" of the Ming. After the Xinhai and Communist changes in government of China, people are less polite when they talk about the old emperors. They usually just call him by his everyday name Zhu Di like a common person. In English, it's more common to talk about him as the Yongle Emperor.

Zhu Di was born on May 2, 1360, during the Yuan part of China's history. His father Zhu Yuanzhang was a successful leader of the Red Turbans fighting the Yuan army to change China. People don't agree about who his mother was. In the histories written by the later Chinese governments, his mother was the Empress Ma, his father's most important wife. Other people—especially people who did not like Zhu Di—said that his mother was one of Zhu Yuanzhang's live-in girlfriends and wasn't even Chinese. They said that he changed all the papers about his real mother after he got more power.

Zhu Yuanzhang won his fight with the Yuan and became the Hongwu Emperor of China in 1368. He called his new government the Ming. The Ming had rules about who should be the new emperor when the old emperor died. Zhu Biao (朱标) was Zhu Yuanzhang's oldest son and people thought he would be the next emperor. Zhu Di was only the 4th son, so people did not think he would become the next emperor. He was still very important, though. The Hongwu Emperor made him the leader of Beiping (today's Beijing and the area around it).

Zhu Biao died before the Hongwu Emperor. When the emperor died, the Ming's rules said that Zhu Biao's son Zhu Yunwen (朱允炆) should be the new leader. He became the Jianwen Emperor in 1398 at the age of 22.

The Jianwen Emperor's many uncles were very powerful, almost like kings. He started to take away their power right away. One was sent away to Yunnan, one died, three were made into common people. Zhu Di was afraid and pretended to be crazy. The Jianwen Emperor was less afraid of him and even let Zhu Di's three sons—whom he held in Yingtian (now Nanjing) to be sure of Zhu Di's good behavior—go to Beiping (now Beijing) to visit their "sick" father before his death.

With his sons free, Zhu Di began to fight the Jianwen Emperor. At first, he said that he really wanted to protect his nephew from the "bad helpers" who were telling the emperor to fight his own family. After he took the capital, though, he rewrote all the government papers to pretend the Jianwen Emperor had never been the emperor. The four years of his nephew's control were dated to the end of the Hongwu Emperor's era. Zhu Di began his new era at the next Chinese New Year and became the Yongle Emperor.

Many people in the government of China said they did not like the Yongle Emperor and that he should not be the country's leader. A body was shown and said to be the Jianwen Emperor's, but it was badly burnt and no one could be sure it was really him. Some people said that the Jianwen Emperor was still alive and that he was hiding as a Buddhist monk. All of this made the Yongle Emperor very worried and angry. He did not stay in Yingtian or make it his capital. He left some of the government there but moved most of it to his home in Beiping. Because China now had a more important northern capital and a secondary southern capital, these two cities came to be known as Beijing and Nanjing. The Yongle Emperor's new, larger home in Beijing grew into the Forbidden City. The Yongle Emperor killed many of the angry government leaders in Nanjing. Sometimes he killed their families. Sometimes he killed their families, friends, and students.

Many of these troublemakers were the people who took power because of their high scores on the imperial examination. The Yongle Emperor gave more power in his government to his eunuchs. One of these men was Zheng He, an Islamic leader who led great treasure ships south from Suzhou and Nanjing in 7 big trips between 1405 and 1433. The first trips may have been looking for the Jianwen Emperor, but they also became trips that taught China about the South China Sea and Indian Ocean and opened up more buying and selling between their countries and China.

The Yongle Emperor died on August 12, 1424, and was followed as emperor by his oldest son Zhu Gaochi, who became the Hongxi Emperor.

All content from Kiddle encyclopedia articles (including the article images and facts) can be freely used under Attribution-ShareAlike license, unless stated otherwise. Cite this article:
Yongle Emperor Facts for Kids. Kiddle Encyclopedia.