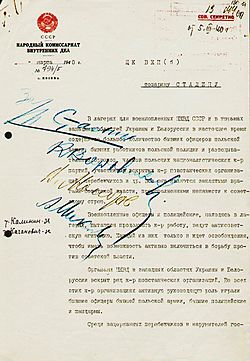 The first page of Beria's notice (oversigned by Stalin and other high-ranking Politburo members), to kill approximately 25,000 Polish officers and intellectuals in the Katyn Forest and other places in the Soviet Union

All content from Kiddle encyclopedia articles (including the article images and facts) can be freely used under Attribution-ShareAlike license, unless stated otherwise. Cite this article:
Secret police Facts for Kids. Kiddle Encyclopedia.