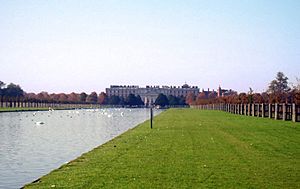 Hampton Court, from the park

Hampton Court Park is a walled royal park managed by the Historic Royal Palaces. The park lies between the gardens of Hampton Court Palace and Kingston upon Thames and Surbiton in south west London, England, mostly within the post town of East Molesey, but with its eastern extremity within the post town of Kingston. In 2014, part of the park was designated a biological Site of Special Scientific Interest (with Bushy Park and Hampton Court Golf Course). It takes up most of the final (lowest) meander of the non-tidal reaches of the River Thames and is mainly divided between a golf course, meadows interspersed with trees used for deer, seasonal horse grazing and wildlife. A corner of the park is used annually for the Hampton Court Flower Show and the part nearest to the palace has the Long Water — an early set of hydro-engineered ponds or lakes, fed by water from the distant River Colne, as are the bodies of water in the neighbouring park, Bushy Park.

Hampton Court Park is a walled deer park of around 700 acres (280 ha) (1.1 sq mi), with a herd of fallow deer, and has been open to the public since 1894. Verges by the A308 road lightly scattered with deciduous trees line the northern wall. These trees, with few evergreens, continue across much of the park. It is documented Cardinal Wolsey inclosed with a wall about 2,000 acres to form this park and Bushy Park for his purchase and reconstruction into an exceptionally grand house on the former manor house of Hampton. It formed what became before his death Hampton Court Palace, taken over by Henry VIII. The king was an avid hunter and had the park used for breeding rabbits and/or hares, pheasants and partridges. 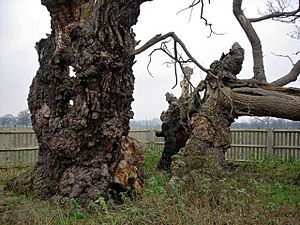 The Mediaeval Oak – said to be 750 years old

A tree, called the Mediaeval Oak (or Methuselah's Oak), in one of the tees for the golf course in the southern part of the park, is said to be 750 years old.

The public towpath by the lowest part of the non-tidal Thames above Teddington Lock lies in all other directions apart from the palace (west). An emergency conditions flood meadow but not a lowered "Flood Storage Area" most of it is in planning (policy Flood Zone 2 or 3, and mostly in long term flood risk zones ranging across its four categories (very low to high risk) High risk, affecting a small portion means that each year this area has a chance of flooding of greater than 3.3%.

North of the road and a cluster of houses connected with the parks is a narrow set of Paddocks and Bushy Park; the Royal Mews graze horses on the park in the summer.

The Long Water, a namesake of a more well-visited lake in Kensington Gardens (see The Long Water), flows gently in the park roughly eastward from the back of Hampton Court Palace ending at the Golden Jubilee Fountain and is underground connected to a landscaped channel, the Longford River after the Upper Lodge Water Gardens and the Diana Fountain, Bushy Park.

The annual Hampton Court Flower Show is held in 25 acres (10 ha) of the park. It is organized by the Royal Horticultural Society and began in 1990. Many prefer it to the better known Chelsea Flower Show because there is more space, and plants and equipment can be bought at the show. As it is the world's most popular event of this type extensive traffic jams can build up. The show has sometimes been criticized for risking damage to historic features in the park.

All content from Kiddle encyclopedia articles (including the article images and facts) can be freely used under Attribution-ShareAlike license, unless stated otherwise. Cite this article:
Hampton Court Park Facts for Kids. Kiddle Encyclopedia.