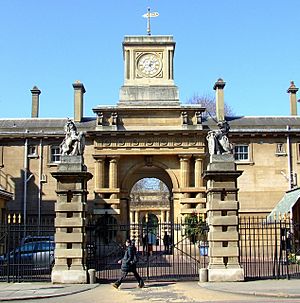 Entrance to the Royal Mews

The Royal Mews is a mews, or collection of equestrian stables, of the British Royal Family. In London these stables and stable-hands quarters have occupied two main sites in turn: the north side of Charing Cross and since the 1820s, to make way for Trafalgar Square, part of the grounds of Buckingham Palace. The site has display royal carriages and motor vehicles. It is open to the public for much of the year. 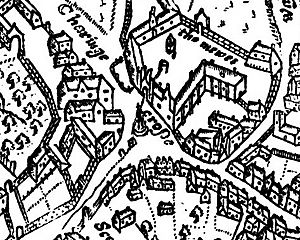 "The mewes" (top right) at Charing Cross, depicted on John Norden's map of Westminster, 1593. The map is oriented with north-west to the top.

The first set of stables to be referred to as a mews was at Charing Cross at the western end of The Strand. The royal hawks were kept at this site from 1377 and the name derives from the fact that they were confined there at moulting (or "mew") time. 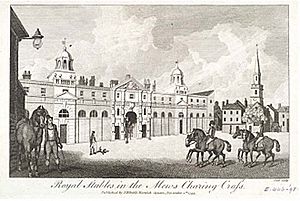 The building was destroyed by fire in 1534 and rebuilt as a stables, keeping its former name when it acquired this new function. On old maps, such as the "Woodcut" map of London of the early 1560s, the Mews can be seen extending back towards the site of today's Leicester Square.

This building was usually known as the King's Mews, but was also sometimes referred to as the Royal Mews, the Royal Stables, or as the Queen's Mews when there was a woman on the throne. It was rebuilt again in 1732 to the designs of William Kent, and in the early 19th century it was open to the public.

On 15 June 1820, the Guards in the Royal Mews mutinied in support of Caroline of Brunswick, whom King George IV was seeking to divorce.

It was an impressive classical building, and there was an open space in front of it which ranked among the larger ones in central London at a time when the Royal Parks were on the fringes of the city and the gardens of London's squares were open only to the residents of the surrounding houses. 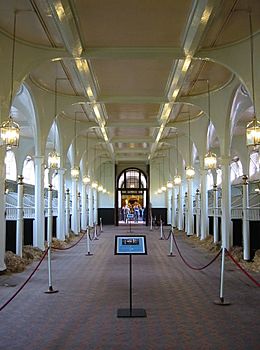 Stables in the Royal Mews

In the 1760s George III moved some of his day-to-day horses and carriages to the grounds of Buckingham House, which he had acquired in 1762 for his wife's use, but the main royal stables housing the ceremonial coaches and their horses remained at the King's Mews. However, when his son George IV had Buckingham Palace converted into the main royal residence in the 1820s the whole stables establishment was moved. The old Mews at Charing Cross was demolished and Trafalgar Square was laid out on the site in 1837–1844. The current Royal Mews was built to designs by John Nash and were completed in 1825 (though the Riding School, thought to be by William Chambers, dates from the 1760s). The buildings have been modified extensively since.

The Royal Mews is regularly open to the public. The state coaches and other carriages are kept there, along with about 30 horses, together with their modern counterparts, the state motor cars. Coachmen, grooms, chauffeurs and other staff are accommodated in flats above the carriage houses and stables.

A few of the carriages stored at the Mews are pictured here in action; several more are illustrated on their own pages (see listing below).

Vehicles in the care of the Royal Mews are listed below. A good number are on public display though not all are kept in London. Most are in regular use, and some (for example, the Broughams) are driven on a daily basis. Others (above all the Gold Coach) are only used on great and rare State occasions. The list includes vehicles for personal, recreational and sporting use, as well as those designed and kept for State occasions: 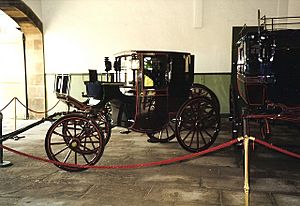 A Royal Mews Brougham on display alongside a Station Bus at Holyrood Palace in Edinburgh. 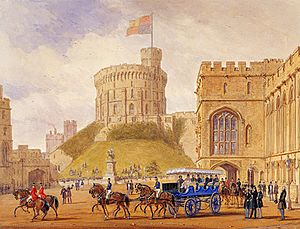 Charabanc (presented by Louis Philippe of France to Queen Victoria) at Windsor Castle in 1844. 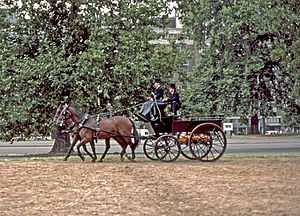 Brakes are regularly used for training and exercising the carriage horses, as seen here in Hyde Park.

In less regular use is Queen Victoria's State Sledge, one of a number of royal sleighs in the Mews.

The horses in the Royal Mews today are for the most part either Windsor Greys or Cleveland Bays, though this has not always been the case (for example, for over 200 years locally bred Hanoverian Cream horses took pride of place in the harness on major state occasions, until problems due to inbreeding led to their use being discontinued in the mid-1920s). The horses are regularly exercised in the art of pulling carriages (one of the reasons for the continuing use of horse-drawn transport for the daily messenger rounds); they are used for competitive and recreational driving as well as for ceremonial duties. The manure that is produced by the horses is used by the adjacent garden at Buckingham Palace. 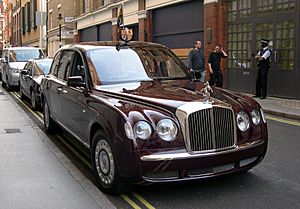 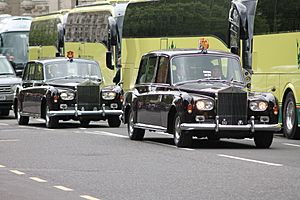 The maintenance and provision of modern motor vehicles is as much a part of the work of the Royal Mews as that of carriages and horses. The State Cars and 'semi-state' cars (as opposed to vehicles for private use) are all painted in black over claret (known as Royal Claret); the five State Cars are without number plates. They comprise: 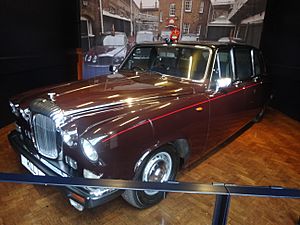 Daimler DS420 limousine on display in the Royal Mews in 2017

Used for less formal occasions and as support vehicles:

The care and training of so many horses, the ongoing care and maintenance of the carriages, cars and tack, along with the actual use of these royal vehicles, means that the Mews is very much a working part of the Palace. The Royal Mews Department is overseen by an official called the Crown Equerry. 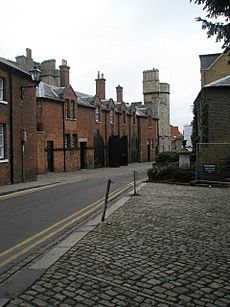 The Royal Mews, Hampton Court Palace overlooks Hampton Court Green. It continues to provide accommodation for royal staff, and horses are stabled there from time to time. It is not open to the public.

There is a working Royal Mews at Windsor Castle where the Ascot carriages are normally kept, together with vehicles used in Windsor Great Park. Some horses for riding (rather than driving) are also stabled here.

At Holyrood, the Royal Mews (situated in Abbey Strand) is one of the oldest parts of the Palace, and is still pressed into service whenever royal carriages are used in Edinburgh.

Historically, the old stables of St James's Palace, which stood where Lancaster House is now, were also sometime referred to as the Royal Mews.

All content from Kiddle encyclopedia articles (including the article images and facts) can be freely used under Attribution-ShareAlike license, unless stated otherwise. Cite this article:
Royal Mews Facts for Kids. Kiddle Encyclopedia.