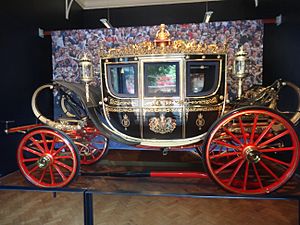 The Irish State Coach is a carriage used by the British monarch to ride from Buckingham Palace to the Palace of Westminster to open Parliament. It was built in 1851 by the Lord Mayor of Dublin. It is enclosed. It was damaged by fire in 1911. It was restored in 1989 by the Royal Mews carriage restorers. The outside is blue and black with golden-colored decoration. The inside is covered in blue damask (a cloth). It is driven from the box seat using four horses. It is kept in the Royal Mews. It can be seen by the public.

All content from Kiddle encyclopedia articles (including the article images and facts) can be freely used under Attribution-ShareAlike license, unless stated otherwise. Cite this article:
Irish State Coach Facts for Kids. Kiddle Encyclopedia.