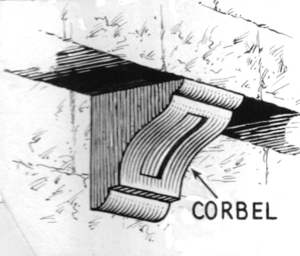 In architecture a corbel or console is a structural piece of stone, wood or metal sticking out from a wall to carry a superincumbent weight. It is a type of bracket. A corbel is a solid piece of material in the wall. A console, by comparison, is a piece applied to the structure. A piece of structural wood projecting in the same way was called a "tassel" or a "bragger" in the UK. The technique of corbelling, where rows of corbels support a projecting wall or parapet, has been used since Neolithic, or New Stone Age, times.

The word "corbel" comes from Old French and derives from the Latin corbellus, a diminutive of corvus (a raven) which refers to the beak-like appearance. Similarly, the French refer to a bracket-corbel, usually a load-bearing internal feature, as a corbeau (a crow).

All content from Kiddle encyclopedia articles (including the article images and facts) can be freely used under Attribution-ShareAlike license, unless stated otherwise. Cite this article:
Corbel Facts for Kids. Kiddle Encyclopedia.