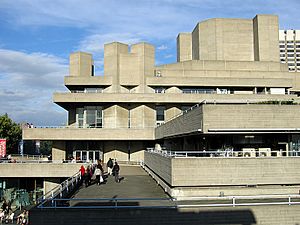 Sir Denys Louis Lasdun, CH, CBE, RA (8 September 1914, Kensington, London – 11 January 2001, Fulham, London) was an eminent English architect, the son of Nathan Lasdun (1879–1920) and Julie (née Abrahams; 1884–1963). Probably his best known work is the Royal National Theatre, on London's South Bank of the Thames, which is a Grade II* listed building and one of the most notable examples of Brutalist design in the United Kingdom.

Lasdun studied at the Architectural Association School of Architecture in London, and was a junior in the practice of Wells Coates. Like other Modernist architects, including Sir Basil Spence and Peter and Alison Smithson, Lasdun was much influenced by Le Corbusier and Ludwig Mies van der Rohe, but there was a gentler, more classical influence, too, from the likes of Nicholas Hawksmoor. Lasdun was elected a Royal Academician on 29 May 1991.

All content from Kiddle encyclopedia articles (including the article images and facts) can be freely used under Attribution-ShareAlike license, unless stated otherwise. Cite this article:
Denys Lasdun Facts for Kids. Kiddle Encyclopedia.