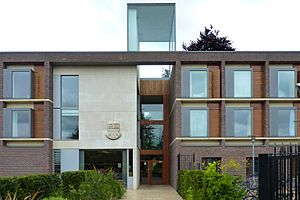 The main entrance of Fitzwilliam College

Fitzwilliam College is one of the colleges of the University of Cambridge, England. It is often called Fitz from the students. It was created in 1966, but it is based on earlier student groups and associations. These began in 1869 with the idea of helping poor people to study at Cambridge. Today the college has around 750 students and is one of the largest. Fitzwilliam has the tradition of doing quite well in the sports.

Some very famous people have studied at this College, like Charles Scott Sherrington and Albert Szent-Györgyi who both won Nobel Prizes.

The name of the college comes from the Fitzwilliam family.

All content from Kiddle encyclopedia articles (including the article images and facts) can be freely used under Attribution-ShareAlike license, unless stated otherwise. Cite this article:
Fitzwilliam College, Cambridge Facts for Kids. Kiddle Encyclopedia.