St Edmund Hall (sometimes known as The Hall or informally as Teddy Hall) is a constituent college of the University of Oxford. The college claims to be "the oldest surviving academic society to house and educate undergraduates in any university" and was the last surviving medieval academic hall at the university.

The college is on Queen's Lane and the High Street, in central Oxford. After more than seven centuries as a men-only college, it became coeducational in 1979. As of 2019, the college had a financial endowment of more than £65 million. 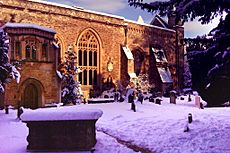 Like the University of Oxford itself, the precise date of establishment of St Edmund Hall is not certain; it is usually estimated at 1236, before any other college was formally established. It is named after St Edmund of Abingdon, Oxfordshire, the first known Oxford Master of Arts and the first Oxford-educated Archbishop of Canterbury, who lived and taught on the college site. The name St Edmund Hall (Aula Sancti Edmundi) first appears in a 1317 rental agreement.

St Edmund Hall began life as one of Oxford's ancient Aularian houses, the medieval halls that laid the foundation of the University, preceding the creation of the first colleges. As the only surviving medieval hall, its members are known as "Aularians". St Edmund Hall acquired the status of a college in 1957, though retaining the historical moniker of "Hall".

The college has a history of independent thought, which brought it into frequent conflict with both Church and State. During the late 14th and early 15th centuries it was a bastion of John Wycliffe's supporters, for which college principal William Taylor was ultimately burnt at the stake, and principal Peter Payne fled the country. In the late 17th century, St Edmund Hall incurred the wrath of the Crown for fostering non-jurors, men who remained loyal to the Scottish House of Stuart and who refused to take the oath to the German House of Hanover, whom they regarded as having usurped the British throne.

In 1978, women were first admitted as members of the Hall. 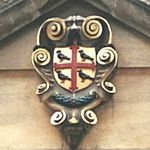 Coat of Arms sculpture above the entrance to the Porters' Lodge.

In the image shown, the college coat of arms is found above the following Latin dedication "sanctus edmundus huius aulae lux", or "St Edmund, light of this Hall".

It is a very common practice within the university to use chronograms for dedications when transcribed into Latin, they are written in such a way that an important date, usually that of a foundation or the dedication itself, is embedded in the text. This is usually achieved by choosing certain letters in the text which correspond to Roman numerals which when added, often disregarding the usual subtractive notation, amount to the required date. These numerals are then indicated by being rendered in a larger size than that of the surrounding letters.

In the above dedication, the text is rendered as

and, in this case, adding the numerals naively gives:

which is a popular, if conservative, estimate for the establishment of the Hall, but is in fact the date of the canonisation of St Edmund of Abingdon. 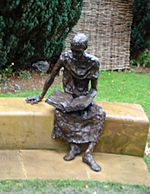 St Edmund Hall is based on a small central site on the north side of the High Street, off Queen's Lane. It shares a wall with New College to the North, and the Carrodus Quad of Queens College to the south.

The front quadrangle is bordered by the porters' lodge, the Old Dining Hall (1659), the college bar and buttery (containing a mid-14th-century fireplace), the chapel with the Old Library above (late 17th century), and accommodation for students and fellows. The quad was closed on the south side when new buildings were opened in the 1920s.

In the centre of the quadrangle is a medieval well, which was uncovered during a renovation during the construction of new buildings in the 20th century. This well is believed to be the original from which St. Edmund himself drew water. A new wellhead was added, with the inscription "haurietis aquas in gaudio de fontibus salvatoris," Latin for "with joy, draw water from the wells of salvation." These words, from Isaiah 12:3, are believed to be those spoken by St. Edmund on his deathbed at Salisbury. A metal grate was added to the well to prevent injuries, but water can still be seen in the well at a depth of about 9 feet. Plans to add a wooden frame and bucket were scrapped to maintain the aesthetics of the quad.

Two passages on the north side of the quadrangle lead to the gardens, originally the churchyard of St. Peter-in-the-east. While many of the graves have been disinterred, several gravestones remain, and many of those removed have been used to pave the paths around the gardens. The garden contains a seated bronze figure depicting St Edmund as an impoverished student. The college library, the deconsecrated 12th century church of St Peter-in-the-East, was converted in the 1970s, and includes the 14th century tower, at the top of which the office of the library fellow is located. The crypt below the church, which sits on pre-Norman foundations dating several hundred years earlier than the church itself, remains consecrated. While typically locked, access may be granted to students through special permission.

The east side of the quadrangle contains the chapel and old library. The chapel, considered quite small among those of Oxford colleges, contains a stained glass window which is an example of some of the earliest work by Sir William Morris, and a painting above the altar named "Supper at Emmaus," by Ceri Richards. Above the Chapel is the old library, the last among Oxford colleges to chain its valuable books, but the first to have shelves against the walls. The Old Library is no longer the main library of the Hall, but is used for events such as Fellow's second dessert following special dinners.

One passage through the quad to the east leads to the modern area of the main site, where the dining hall, senior common room, classrooms, and undergraduate accommodation may be found. The dining hall, built in a modern style, seats approximately 230 students and is used daily for breakfast, lunch, and dinner for the student body. On Tuesday and Fridays, Formal Hall is also held here, and faculty join students, dining at the high table at the head of the hall. Formal Halls are presided by Principal if present, or if absent, (in order) the Bursar, the Senior Tutor, or most senior fellow present. The fellow presiding dinner is expected to open dinner with the gavel and grace, and close dinner in the same style following pudding, after which fellows retire to the senior common room or old library for second dessert, and students remain at table for a final course of cheese, fruit, coffee, and port wine.

There are three common rooms in college, the senior common room for faculty, the middle common room for graduate students and fourth-year undergraduates, and the junior common room for undergraduate students. The MCR is located in the oldest portion of the main quad, and houses the mascot of the college, a large teddy bear named Sebastian. The SCR is decorated in a 1960s style and is located across from the modern dining hall. It includes a lounge and lunchroom in which daytime meals are served for fellows. The JCR is located in the modern portion of the main site and includes various amenities including a pool table, vending machine, and television area.

The college also owns annexes at Norham Gardens, on Dawson Street, and on Iffley Road.

The Norham Gardens annex serves as the main graduate accommodation site, with housing at 17, 19, and 26 Norham Gardens and 1 Crick Road. It has a capacity to house most first year graduate students, and contains its own common room, computer room, gardens, and gymnasium. In addition, there is a limited quantity of faculty housing at this site, which also has a Dean and Warden at all times.

The Dawson Street and Iffley road annexes host undergraduates who do not live at main site. These locations are conveniently located near the amenities of town as well as the dining hall.

The College recently completed an Aularian-supported programme of restoration to the façade of the front quad and Queen's Lane frontage.

As of 2015, the college had about 400 undergraduate and 350 graduate students. There are student bodies run by committee for both undergraduates and postgraduates: the Junior Common Room (JCR) and Middle Common Room (MCR). Both the JCR and MCR organise regular events, including a programme of activities for Freshers' week, dinners and movie nights.

Students at St Edmund Hall participate in many extra-curricular activities, including creative writing workshops run by Lucy Newlyn, English Fellow. The College held its first Hall Writers' Forum in 2013, 'A Celebration of Writing at the Hall', at which many alumni, who are now professional writers (including journalists, comedians, academics, poets and novelists) spoke or participated in discussions about creative writing. In 2015, a group of then-current St Edmund Hall students founded the Hall Writers and Artists Gallery, an annual student publication containing a selection of art and literature produced by its current undergraduates. Two instalments of the collection have been produced, with a third due for the 2016/17 academic year.

In 2012, Chris Watson was appointed as Director of Music and has introduced a series of lunchtime concerts at the college. Together with the 2 organ scholars, he also directs the Hall's active choir, which includes 8 choral scholars.

St Edmund Hall has a lively drama society, the John Oldham Society, which took a production to the Edinburgh Fringe in 2012 and worked in Cameroon in 2013 on a community drama project.

The College also runs an annual journalism competition for Oxford students, in memory of alumnus Philip Geddes. Geddes also lends his name to an annual lecture.

Students can apply for a St Edmund Hall Masterclass Award, which will support individuals or groups who have already reached a high level of achievement in an extra-curricular activity and are now seeking funding for additional coaching to develop and hone their skills. This may include, but is not exclusive to, the areas of writing, drama, music, art and sport.

The student body participates in a number of sports including, rugby, badminton, canoe polo team, sailing, men's and women's football, men's basketball and hockey. The college fields teams in a wide variety of other sports. The college maintains a proud record in men's Rugby in particular, having won more than half of the Cuppers tournaments entered. In 2014-15 college teams reached at least the semi-finals of Cuppers in six sports.

The usual grace given before Formal Hall, as said by the fellow presiding at the dinner, is:

Benedictus, Benedicat per Jesum Christum Dominum Nostrum
(May he who is Blessed bless [this food] through Jesus Christ Our Lord)

The post-cibal grace, given following pudding, is a slight variant on the above:

To which the assembly responds Amen. If the presiding fellow so wishes, only the first two words may be spoken, excluding the Christian element of the graces.

More extended (or sung) forms of the grace are sometimes given but this is limited to special occasions, such the Feast of St. Edmund, a formal held each year to commemorate the namesake of the hall.

The traditional college toast is occasionally also said on rare occasion at dinners, and is simply "Floreat Aula," Latin for "May the Hall Flourish."

All content from Kiddle encyclopedia articles (including the article images and facts) can be freely used under Attribution-ShareAlike license, unless stated otherwise. Cite this article:
St Edmund Hall, Oxford Facts for Kids. Kiddle Encyclopedia.