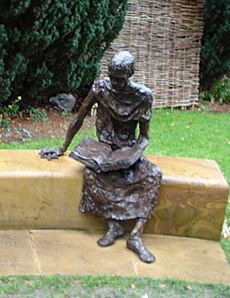 Seated statue of St Edmund of Abingdon in the churchyard.

St Peter-in-the-East is a 12th-century church on Queen's Lane, north of the High Street in central Oxford, England. It forms part of St Edmund Hall, one of the Oxford University colleges. It is now deconsecrated and houses the college library for graduates and undergraduates. The churchyard to the north is laid out as a garden and contains a seated bronze statue depicting St Edmund as an impoverished student.

St Peter-in-the-East is believed to be named after the 5th-century church of S. Pietro in Vincoli, Rome, Italy. When the Church of St Peter-le-Bailey was built in precincts of Oxford Castle, this church was renamed St-Peter-in-the-East since it is located near the East Gate of the walled city of Oxford. The Norman parts of the current church were built around 1140 by Robert D'Oilly, who was then Governor of Oxford.

There was a church of St Peter in Oxford before this one, which was mentioned in the Domesday Book of c1085:

the church of St. Peter Oxenford holds of Robert two hides in Haliwelle...It was worth twenty shillings, now it is worth forty...

The church passed to the Crown from D'Oilly's heirs. In 1266, King Henry III gave it to Walter de Merton and thus until the 1970s, Merton College held the advowson for the church. The churches at Wolvercote and Holywell were originally chapels of ease of St Peter's.

At present, the building serves as the College library of St. Edmund Hall, University of Oxford. It was deconsecrated and converted in the 1970s.

All content from Kiddle encyclopedia articles (including the article images and facts) can be freely used under Attribution-ShareAlike license, unless stated otherwise. Cite this article:
St Peter-in-the-East Facts for Kids. Kiddle Encyclopedia.