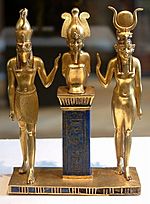 Nontrinitarism is a movement within Christianity. Nontrinitarians reject the idea of Trinity. That idea says that god is three different persons in one being.

There are several movements which can be classified as Nontrinitarian. At the First Council of Nicaea, in the year 325, people met and defined the idea of trinity. Some movements started before the council. Nontrinitarianism was later renewed in the Gnosticism of the Cathars in the 11th through 13th centuries, in the Age of Enlightenment of the 18th century, and in Restorationism during the 19th century.

All content from Kiddle encyclopedia articles (including the article images and facts) can be freely used under Attribution-ShareAlike license, unless stated otherwise. Cite this article:
Nontrinitarianism Facts for Kids. Kiddle Encyclopedia.