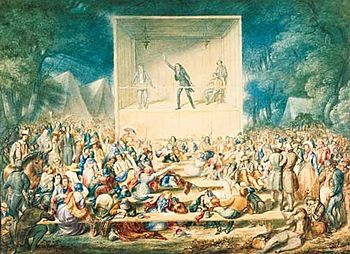 1839 Methodist camp meeting, watercolor from the Second Great Awakening.
For the idea of 'Universial Restoration', as found in Ancient Greece, see Apocatastasis.

Restorationism, also called Christian primitivism is a movement that tries to restore to model itself after what is known or believed of the Early Church. Over the course of time, different groups have used the term, with different meanings:

All content from Kiddle encyclopedia articles (including the article images and facts) can be freely used under Attribution-ShareAlike license, unless stated otherwise. Cite this article:
Restorationism Facts for Kids. Kiddle Encyclopedia.