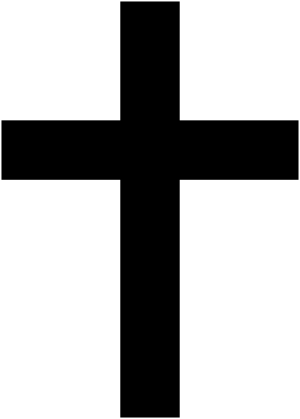 Christian symbolism gives objects or actions a meaning that shows Christian ideas. Religious symbolism has an effect when it affects both the intellect and the emotions. The choice of actions and objects for symbolism is very small. This makes it hard to chose a symbol that other religions and traditions do not use.

Elemental symbols were often used by the early Church. Water is an important symbol to Christians. Water is symbolic in baptism. It may also mean cleansing or purity. Fire symbolizes both the Holy Spirit and light. It is often used in the form of a candle flame. The sources of these symbols comes from the Bible. Examples include the tongues of fire that symbolized the Holy Spirit at Pentecost, Jesus' description of his followers as the light of the world, and God is a consuming fire found in Hebrews 12.

The fish was the most important symbol to early Christians. The symbolic fish was familiar to Christians from the earliest times. It can be seen in Roman monuments such as the Capella Greca and the Sacrament Chapels of the catacomb of St Callistus. The fish was used as a Christian symbol in the first decades of the 2nd century. The symbol may come from the miracle Jesus is said to have performed by multiplying loaves of bread and fishes on the shore of the Sea of Galilee. Its popularity is thought to mainly come from an acrostic made of the first letters of five Greek words Iesous CHristos THeou Yios Soter. These form the Greek word Ichthys which means fish. Iesous Christos Theou Yios Soter translates as Jesus Christ, Son of God, Saviour. 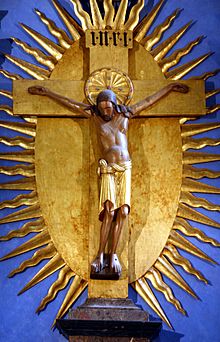 The Crucifix, a cross with corpus. It is a symbol used by the Catholic Church as well as in Lutheranism, Eastern Orthodoxy, and Anglicanism.

The cross is one of the most well known symbols in the world. It was used as a symbol from the earliest times. This is shown in arguments against Christianity shown in the Octavius of Minucius Felix

In the early 3rd century, Clement of Alexandria, used the phrase τὸ κυριακὸν σημεῖον (the Lord's sign) to mean the cross. He used the phrase when discussing that the number 318 (in Greek numerals, ΤΙΗ) in Genesis 14:14 was a foreshadowing of the cross and Jesus. T is the Greek number fore 300. ΙΗ, the first two letters of Jesus's name ΙΗΣΟΥΣ, means 18. Tertullian called the Christian believers crucis religiosi, i.e. "devotees of the Cross". In his book De Corona, Tertullian tells how it was a tradition for Christians to trace the sign of the cross on their foreheads.

The crucifix was not used until the 5th century. French Medievalist historian M.-M. Davy has described in great details Romanesque Symbolism as it developed in the Middle Ages in Western Europe.

Ancient people believed that the flesh of a peafowl did not decay after death. It became a symbol of immortality. This symbolism was used by early Christianity. Many early Christian paintings and mosaics show the peacock. The peacock is still used in the Easter season in the east. 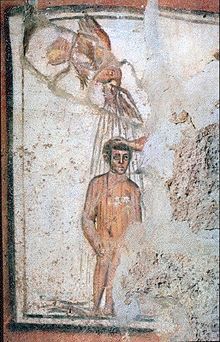 Some of the oldest symbols in the Christian church are the sacraments. The number of sacraments is different in each denominations. All denominations have Eucharist and baptism. Others which may or may not be used are ordination, unction, confirmation, penance and marriage. The rites are seen as a symbol of the spiritual change or event that takes place. In the Eucharist, the bread and wine are symbolic of the body and blood of Jesus. In Roman Catholicism, they become the actual Body of Christ and Blood of Christ through Transubstantiation. This represent salvation brought by the death of Jesus. The rite of baptism is symbolic of the cleansing of the sinner by God. Where baptism is by immersion, it symbolizes spiritual death and resurrection. Different groups believe the sacraments mean different things. Some Protestant denominations think they are only symbolic. Roman Catholics, Orthodox, some Anglicans, and some Lutherans feel that, by the power of God, the sacraments have an actual effect."

Examples of other symbols 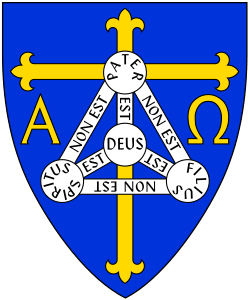 All content from Kiddle encyclopedia articles (including the article images and facts) can be freely used under Attribution-ShareAlike license, unless stated otherwise. Cite this article:
Christian symbolism Facts for Kids. Kiddle Encyclopedia.