For other uses, see Flame (disambiguation). 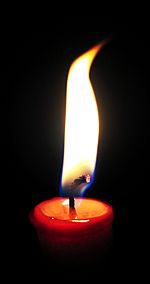 The flame of a burning candle

A flame is the visible part of a fire. It gives light and heat. It is the result of an exothermic reaction. The color and temperature of a flame depend on the type of fuel that is used to make the fire. A blue or white flame is often very hot, while a red, orange, or yellow flame is less hot. 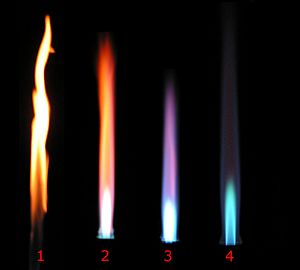 Different flame types of a Bunsen burner depend on oxygen supply. On the left a rich fuel with no premixed oxygen produces a yellow sooty diffusion flame; on the right a lean fully oxygen premixed flame produces no soot and the flame color is produced by molecular radicals, especially CH and C2 band emission.

Flame color depends on several factors, the most important typically being black-body radiation and spectral band emission, with both spectral line emission and spectral line absorption playing smaller roles. In the most common type of flame, hydrocarbon flames, the most important factor determining color is oxygen supply and the extent of fuel-oxygen pre-mixing, which determines the rate of combustion and thus the temperature and reaction paths, thereby producing different color hues.

In a laboratory under normal gravity conditions and with a closed oxygen valve, a Bunsen burner burns with yellow flame (also called a safety flame) at around 1,000 °C (1,800 °F). This is due to incandescence of very fine soot particles that are produced in the flame. With increasing oxygen supply, less black body-radiating soot is produced due to a more complete combustion and the reaction creates enough energy to excite and ionize gas molecules in the flame, leading to a blue appearance. The spectrum of a premixed (complete combustion) butane flame on the right shows that the blue color arises specifically due to emission of excited molecular radicals in the flame, which emit most of their light well below ≈565 nanometers in the blue and green regions of the visible spectrum.

The colder part of a diffusion (incomplete combustion) flame will be red, transitioning to orange, yellow, and white as the temperature increases as evidenced by changes in the black-body radiation spectrum. For a given flame's region, the closer to white on this scale, the hotter that section of the flame is. The transitions are often apparent in fires, in which the color emitted closest to the fuel is white, with an orange section above it, and reddish flames the highest of all. A blue-colored flame only emerges when the amount of soot decreases and the blue emissions from excited molecular radicals become dominant, though the blue can often be seen near the base of candles where airborne soot is less concentrated.

Specific colors can be imparted to the flame by introduction of excitable species with bright emission spectrum lines. In analytical chemistry, this effect is used in flame tests to determine presence of some metal ions. In pyrotechnics, the pyrotechnic colorants are used to produce brightly colored fireworks.

All content from Kiddle encyclopedia articles (including the article images and facts) can be freely used under Attribution-ShareAlike license, unless stated otherwise. Cite this article:
Flame Facts for Kids. Kiddle Encyclopedia.