Karlstad is built on the river delta where Sweden's longest river, Klarälven, runs into Sweden's largest lake, Vänern. It has the second largest lake port in the country after Västerås.

Karlstad is often associated with sunshine and the symbol for Karlstad is a smiling sun. Karlstad is reputed to be one of the sunniest towns in Sweden and a local waitress, known as "Sola i Karlstad" (the Sun in Karlstad) for her sunny disposition, is also commemorated with a statue. 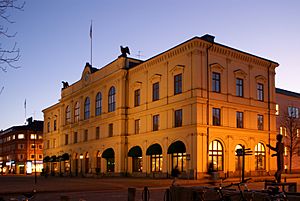 On Karlstad's largest islet, there was a place of counsel called Tingvalla in the medieval age, which had roots from the Viking Age before 1000 AD. It was also used as a market place. Karlstad was granted its city charter on March 5, 1584 by the Swedish Duke Charles, who would later be crowned King Charles IX of Sweden. The city derives its name from the King – Karlstad literally means Charles' city. The Duke also granted Karlstad the right as a governmental seat in the region, and gave it a substantial amount of land.

The Duke built his own house in the city, which is referred to as Kungsgården (The King's Manor). Karlstad's Cathedral was built on the location Kungsgården in 1724 - 1730 by Christian Haller.

Karlstad has suffered four major fires. Only the cathedral and a few houses remained after the last fire on July 2, 1865. Karlstad was thereafter rebuilt according to a grid pattern with wide streets surrounded by trees.

In 1905, the agreement to dissolve the union between Norway and Sweden was signed in Karlstad.

All content from Kiddle encyclopedia articles (including the article images and facts) can be freely used under Attribution-ShareAlike license, unless stated otherwise. Cite this article:
Karlstad Facts for Kids. Kiddle Encyclopedia.