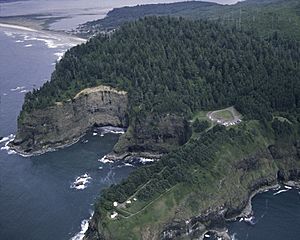 The Oregon Coast Trail passes through the center of this headland and interpretive displays along the trail describe the varied wildlife. From this trail, it is possible to see migrating gray whales, three species of scoters, western grebes, and common loons. A wildlife viewing deck, part of the Cape Meares State Scenic Viewpoint, provides views of the refuge's sea cliffs and inshore islands. In season, visitors can see the aerie of a nesting peregrine falcon pair. Each spring thousands of seabirds return to nest on the cliffs. Species that can be seen are brants, pelagic cormorants, common murres, tufted puffins, pigeon guillemots, western gulls, and black oystercatchers. This state park has 3 miles (4.8 km) of hiking trails and a 1-mile (1.6 km) walking trail through the forest of sitka spruce and western hemlock.

Some of the trees on the refuge are hundreds of years old and more than 200 feet (61 m) tall. The Cape Meares Giant, a sitka spruce, is of special interest. After the Great Coastal Gale of 2007 killed the Klootchy Creek Giant, once considered the largest sitka spruce in the world, the U.S. Fish and Wildlife Service (FWS) granted a special use permit to Ascending the Giants, a Portland based organization, which allowed them to climb and measure the Cape Meares Giant. Based on the results, the FWS issued a press release in February 2008 that announced that the tree is the largest known Sitka spruce in the state and that it was designated an Oregon Heritage Tree. Oregon's actual largest Sitka Spruce, using a point system, is Falcon's Tower, discovered and measured by Certified Arborist M. D. Vaden. Cape Meares Giant Spruce had only 743 points, whereas Falcon's Tower was documented at 750 points by M. D. Vaden. Falcon's Tower is in Oswald West State Park, between Cannon Beach and Manzanita, Oregon.

All content from Kiddle encyclopedia articles (including the article images and facts) can be freely used under Attribution-ShareAlike license, unless stated otherwise. Cite this article:
Cape Meares National Wildlife Refuge Facts for Kids. Kiddle Encyclopedia.