Pacific City and Nestucca Bay from the top of the Cape Kiwanda sand dune. 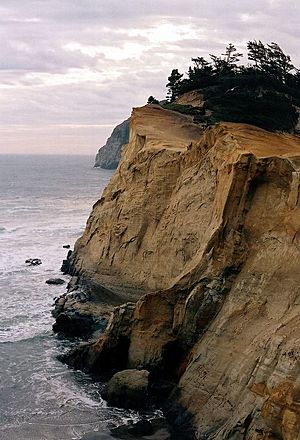 The view from the trail on Cape Kiwanda

Pacific City is a census-designated place (CDP) and unincorporated community in Tillamook County, Oregon, United States. The population was 1,027 at the 2000 census. Pacific City's main attraction is the Cape Kiwanda State Natural Area.

In 1845, Mr. Johnson, a cook on an English ship sailing along the Columbia River, deserted and traveled down the Willamette Valley. Establishing a land claim in Champoeg, he began removing brush and that summer set off a burn to clear debris. The Champoeg Fire got out of control and spread eastward. Unfortunately, the wind then reversed direction and strengthened, blowing the blaze around the previous burn and fanning it into the dry Coast Range, where it burned in the Yamhill basin for weeks, consuming 1,500,000 acres (6,100 km2) of old growth forest - the largest such area destroyed in a single forest fire in the United States. Settlers did not live west of the Coast Range, but the small tribes of Native Americans in the area, already depleted by 80% due to malaria and other epidemics from 1830–1841, were driven from their lands.

The Nestuggas were one such tribe, that had previously been encamped just north of Pacific City near the town of Woods. They had noticed the smoke for several weeks, but were surprised one morning as the bright flames flickered atop the crests of the surrounding hills and rushed down on them. The Nestuggas fled by canoe down the Big Nestucca River to the ocean, and took refuge on the half-mile wide bare sandspit between Nestucca Bay and the ocean. After several weeks the fires were ended by a heavy rain, but the devastation had been complete: The forests were gone, and the game found to be charred crisp or cooked in the water they had sought refuge in.

Nestucca Bay was a rich fishing area, allowing the Nestuggas to survive despite the destruction of game. However, beginning in 1854 settlers began arriving in the Tillamook Valley, and by 1876 Chief Nestugga Bill and the 200 remaining people of the small tribe were relocated to a reservation on the Salmon and Siletz River.

Many early pioneers arrived via seagoing steamers, others arrived from across the mountains. The town of Woods established itself as a depot for the new arrivals and a source of supplies and trade for the settlers. In 1886 the Linewebber and Brown cannery was started to take advantage of the plentiful fish in Nestucca Bay, shipping 12,000 cans of salmon a year and providing an economic basis until 1926 for the region, along with logging and dairy farming. The area also became a "vacation" destination for Oregon Trail pioneers from the midwest, who had never seen the ocean. 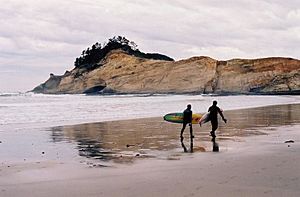 Surfers in Pacific City with Cape Kiwanda in the background, November 2004

In 1893, Thomas Malaney platted the town of Ocean Park (now Pacific City) directly across the river from Woods. When a flood in 1894 wiped out the first lots, Malaney moved the town south to higher ground. The Sea View hotel (later renamed Edmundes Hotel) was built around 1895 to serve vacationers from the Willamette Valley. Other buildings and campgrounds were established for visitors, and Ferry Street was "paved" with wooden planks for automobiles.

The town gained its modern name of Pacific City in 1909 to avoid confusion with the Washington town of Ocean Park. By 1926, overfishing from gillnetting had left the bay depleted of salmon, so commercial harvesting was stopped and fishermen switched to surf-launched dories; over time due to commercial fishing vessels, the Dory Fleet dwindled and today only a few recreational fishermen keep the tradition alive. Tourism in the 1920s became the mainstay of the economy, lasting until the depression of the 1930s. An airport was built to attract barnstormers and aviators, and other roads and bridges were opened.

Pacific City is located along the Pacific Ocean adjacent to Bob Straub State Park and spans the Nestucca River with about half the city's area being behind Nestucca Bay. It is part of the Oregon Coast.

There were 485 households out of which 13.4% had children under the age of 18 living with them, 54.8% were married couples living together, 6.6% had a female householder with no husband present, and 34.6% were non-families. 30.1% of all households were made up of individuals and 14.8% had someone living alone who was 65 years of age or older. The average household size was 2.12 and the average family size was 2.55.

All content from Kiddle encyclopedia articles (including the article images and facts) can be freely used under Attribution-ShareAlike license, unless stated otherwise. Cite this article:
Pacific City, Oregon Facts for Kids. Kiddle Encyclopedia.