Cannon Beach is a city in Clatsop County, Oregon, United States. Its population was 1,690 at the 2010 census. It is a popular coastal Oregon tourist destination, famous for Haystack Rock, a 235 ft (72 m) sea stack that juts out along the coast. In 2013, National Geographic listed it as "one of the world’s 100 most beautiful places." 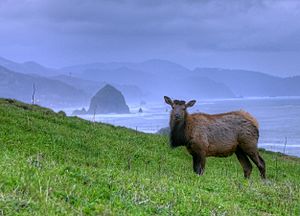 The first recorded journey by an American to what is now Cannon Beach was made by William Clark, one of the leaders of the Lewis and Clark Expedition in early 1805. The expedition was wintering at Fort Clatsop, roughly 20 miles (32 km) to the north near the mouth of the Columbia River. In December 1805, two members of the expedition returned to camp with blubber from a whale that had beached several miles south, near the mouth of Ecola Creek. Clark later explored the region himself. From a spot near the western cliffs of the headland he saw "...the grandest and most pleasing prospects which my eyes ever surveyed, in front of a boundless Ocean..." That viewpoint, later dubbed "Clark's Point of View," can be accessed by a hiking trail from Indian Beach in Ecola State Park.

Clark and several of his companions, including Sacagawea, completed a three-day journey on January 10, 1806, to the site of the beached whale. They encountered a group of Native Americans from the Tillamook tribe who were boiling blubber for storage. Clark and his party met with them and successfully bartered for 300 pounds (140 kg) of blubber and some whale oil before returning to Fort Clatsop. There is a wooden whale sculpture commemorating the encounter between Clark's group and the Tillamooks in a small park at the northern end of Hemlock Street.

Clark applied the name "Ekoli" to what is now Ecola Creek. Ehkoli is a Chinook word for "whale". Early settlers later renamed the creek "Elk Creek", and a community with the same name formed nearby.

In 1846, a cannon from the US Navy schooner Shark washed ashore just north of Arch Cape, a few miles south of the community. The schooner hit land while attempting to cross the Columbia Bar, also known as the "Graveyard of the Pacific." The cannon, rediscovered in 1898, eventually inspired a name change for the growing community. In 1922, Elk Creek was redubbed Cannon Beach (after the name of the beach that extends south of Ecola Creek for 8 miles (13 km), ending at Arch Cape) at the insistence of the Post Office Department because the name was frequently confused with Eola. Elk Creek itself was renamed Ecola Creek to honor William Clark's original name.

The cannon is now housed in the city's museum and a replica of it can be seen alongside U.S. Route 101. Two more cannons, also believed to have been from the Shark, were discovered on Arch Cape over the weekend of February 16, 2008.

U.S. Highway 101 formerly ran through Cannon Beach. In 1964, a tsunami generated by the Good Friday earthquake came ashore along the coast of the Pacific Northwest. The subsequent flooding inundated parts of Cannon Beach and washed away the highway bridge located on the north side of city. The city, now isolated from the highway, decided to attract visitors by holding a sand castle contest, an event that still continues annually every June. 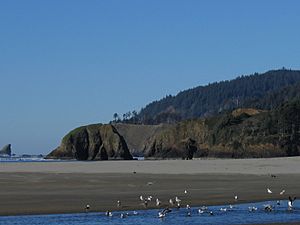 Looking northwest up the beach

According to the United States Census Bureau, the city has a total area of 1.54 square miles (3.99 km2), all land.

This region experiences warm, dry summers, with no average monthly temperatures above 71.6 °F (22.0 °C). According to the Köppen Climate Classification system, Cannon Beach has a warm-summer Mediterranean climate, abbreviated "Csb" on climate maps.

There were 759 households, of which 19.1% had children under the age of 18 living with them, 45.1% were married couples living together, 7.4% had a female householder with no husband present, 2.2% had a male householder with no wife present, and 45.3% were non-families. 38.1% of all households were made up of individuals, and 13.3% had someone living alone who was 65 years of age or older. The average household size was 2.07 and the average family size was 2.70.

The city hosts an annual sand castle-building contest in June.

The city also hosts an annual Fourth of July parade. Parades in recent years have featured a military flyover and a "Lawn Chair Brigade".

"Spring Unveiling" is an annual arts festival, held on the first Sunday in May, hosted by the city's galleries.

There is an annual late-fall festival called the Stormy Weather Arts Festival, held in November, where artists from the Pacific Northwest showcase their artwork in the local galleries. Artwork is available for purchase in an auction held at the end of the event. 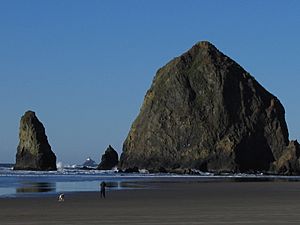 Cannon Beach is recognized by its well-known landmark, Haystack Rock, located southwest of downtown Cannon Beach, near Tolovana Park. This igneous rock has an elevation of 235 feet (72 m) and is often accessible at low tide, especially in the summertime. There is a small cave system that penetrates the rock and can be seen from the coastline. The rock is also protected as a marine sanctuary, Oregon Islands National Wildlife Refuge and events are not allowed within 100 feet (30 m) of either side of the rock. Near Haystack Rock are the Needles, two tall rocks rising straight out of the water.

The main road through Cannon Beach is Hemlock Street, which runs from the north end of the city to the south, through Tolovana Park. Both ends of the street connect to U.S. Highway 101.

The NorthWest POINT runs between Cannon Beach and Union Station in Portland; tickets can be booked through Amtrak.

Cannon Beach is a tourist resort destination. Because of its proximity to Portland, Oregon, it is particularly known as a weekend getaway spot for residents and tourists of the city.

Chain stores such as Safeway and McDonald's have been discouraged from building in Cannon Beach in order to preserve the local economy and small-town feel.

Artisan shops and local restaurants line the streets of the town.

All content from Kiddle encyclopedia articles (including the article images and facts) can be freely used under Attribution-ShareAlike license, unless stated otherwise. Cite this article:
Cannon Beach, Oregon Facts for Kids. Kiddle Encyclopedia.