Seaside is a city in Clatsop County, Oregon, United States. The name Seaside is derived from Seaside House, a historic summer resort built in the 1870s by railroad magnate Ben Holladay. The city's population was 6,457 at the 2010 census. 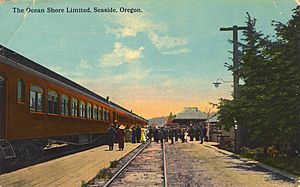 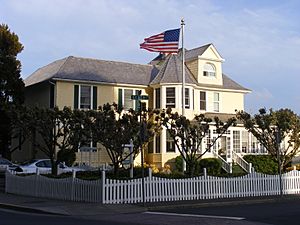 The Gilbert House in Seaside

The Clatsop were an historic Native American tribe that had a village named Ne-co-tat (in their Chinook language) in this area. Indigenous peoples had long inhabited the coastal area.

About January 1, 1806, a group of men from the Lewis and Clark Expedition built a salt-making cairn at the site later developed as Seaside. The city was not incorporated until February 17, 1899, when coastal resort areas were being settled. It is about 79 miles by car northwest of Portland, Oregon, a major population center.

In 1912, Alexandre Gilbert (1843–1932) was elected Mayor of Seaside. Gilbert was a French immigrant, a veteran of the Franco Prussian War (1870-1871). After living in San Francisco, California and Astoria, Oregon, Gilbert moved to Seaside where he had a beach cottage (built in 1885). Gilbert was a real estate developer who donated land to the City of Seaside for its one-and-a-half-mile-long Promenade, or "Prom," along the Pacific beach.

In 1892 he added to his beach cottage. Nearly 100 years later, what was known as the Gilbert House was operated commercially as the Gilbert Inn since the mid-1980s. Both it and Gilbert's eponymous "Gilbert Block" office building on Broadway still survive.

Gilbert died at home in Seaside and is interred in Ocean View Abbey Mausoleum in Warrenton.

360° panoramic view from the beach at Seaside. Tillamook Head at left.

Seaside lies on the edge of the Pacific Ocean, at the southern end of the Clatsop Plains, about 29 km (18 mi) south of where the Columbia River empties into the Pacific. The city is developed on both sides of the Necanicum River, which flows to the ocean at the city's northern edge. Tillamook Head towers over the southern edge of the city.

The geography associated with the gradual slope of the broad sandy beaches of Clatsop Spit provide excellent conditions for the formation of beds of millions of Pacific razor clams annually. The razor clams attract thousands of visitors to Seaside Beach each year.

Part of Seaside is located in a tsunami inundation zone. Among other preparation, the City of Seaside has embarked on a program in which residents above the zone are asked to volunteer to store within their homes barrels of medical supplies, water purification systems, emergency rations, tarps, and radios, with each barrel having enough supplies to last 20 individuals for at least 3 days. As of January 2017, there are 119 barrels within volunteer households and a waiting list of interested households.

Seismologists estimate that there is a one in three chance that Seaside will be hit by an earthquake and tsunami within the next fifty years. On Tues. Nov. 8, 2016, Seaside citizens voted 65% to 35% to issue 99.7 million in bonds to move the remaining three schools out of the tsumani inundation zone.

There were 2,969 households of which 24.2% had children under the age of 18 living with them, 35.4% were married couples living together, 11.5% had a female householder with no husband present, 5.8% had a male householder with no wife present, and 47.3% were non-families. 38.6% of all households were made up of individuals and 15.4% had someone living alone who was 65 years of age or older. The average household size was 2.16 and the average family size was 2.83.

The Seaside Jazz Festival (formerly the Oregon Dixieland Jubilee) is an annual festival that features some of the most popular Trad Jazz and Swing bands in the US and Canada. Seaside holds an art walk the first Saturday of each month.

Seaside hosts an annual 4th of July celebration which includes a parade, outdoor concerts, and one of the largest fireworks displays on the west coast. 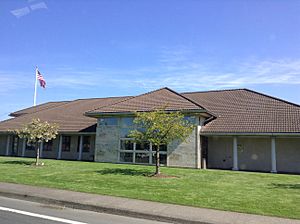 Every spring (until 2017, when the conference was moved to Salem), Seaside hosted the Dorchester Conference, a convention of Oregon political activists, typically conservative, independent, or center-right. This convention was founded in 1964 by then-state representative Bob Packwood as a forum for all Republicans statewide.

In the 1990s it became dominated by members of the conservative branch of the party. Over the years the conference has attracted visits from presidential candidates, debates between Republican primary candidates, and discussions of wider political and social issues. It is run by an independent board and is not formally affiliated with the Oregon Republican Party.

The Miss Oregon Pageant, the official state finals to the Miss America Pageant, takes place annually at the Seaside Civic and Convention Center.

The annual Salt Maker's Return is held in August. The themed event celebrates Seaside history. Five men of the Lewis and Clark expedition needed nearly two months to make the equivalent of 28 US gallons (110 l) of salt; it was critical for them to be able to preserve meat for the winter and their several thousand-mile journey home to the East.

The beach and promenade at Seaside serve as the finish line for the Hood to Coast and Portland to Coast relays, held annually on the weekend before Labor Day.

Seaside is home to the Seaside Aquarium, featuring living regional marine life, a hands-on discovery center, and a 35-foot (11 m) gray whale skeleton, all within a short walk from the Lewis & Clark monument.

All content from Kiddle encyclopedia articles (including the article images and facts) can be freely used under Attribution-ShareAlike license, unless stated otherwise. Cite this article:
Seaside, Oregon Facts for Kids. Kiddle Encyclopedia.