Leach's storm petrel or Leach's petrel (Oceanodroma leucorhoa) is a small seabird of the tubenose order. It is named after the British zoologist William Elford Leach. The scientific name is derived from Ancient Greek. Oceanodroma is from okeanos, "ocean" and dromos, "runner", and leucorhoa is from leukos, "white" and orrhos, "rump".

It breeds on inaccessible islands in the colder northern areas of the Atlantic and Pacific Oceans. It nests in colonies close to the sea in well concealed areas such as rock crevices, shallow burrows, or even logs. It lays a single white egg, which often has a faint ring of spots at the large end. This storm petrel is strictly nocturnal at the breeding sites to avoid predation by gulls and skuas, and even avoids coming to land on clear, moonlit nights. The largest colony of Leach's storm petrels can be found on Baccalieu Island of eastern Canada, an ecological reserve with more than 3 million pairs of the birds.

Leach's petrel, known in some rural areas as Carrie chicks, is a small bird at 18–21 cm in length with a 43– to 48-cm wingspan. Like many other storm petrels, it has all-dark plumage and usually a white rump. However, dark-rumped individuals exist on the west coast of North America; they are very rare north of southern California, but the percentage increases suddenly on the United States-Mexico border, where 90-100% of breeding birds are dark-rumped. In Europe, it can be readily distinguished from the European storm petrel and Wilson's storm petrel by its larger size, forked tail, different rump pattern, and flight behavior. Identification in the Americas, however, proves more difficult. On the Atlantic Coast, separating this species from band-rumped storm petrels is difficult; identification involves characteristics such as the extent of white on the rump and flight pattern. Discerning this species from others is arguably hardest on the Pacific Coast, where the dark-rumped form can be confused with at least three other all-dark storm petrel species. Here, identification involves close attention to wingbeats and overall color. It has a fluttering flight, and patters on the water as it picks planktonic food items from the ocean surface. Like most petrels, its walking ability is limited to a short shuffle to the burrow.

It is strictly pelagic outside the breeding season, and this, together with its remote breeding sites, makes Leach's petrel a difficult bird to see from land. Only in storms might this species be pushed into headlands. Unlike the storm petrel, it does not follow ships. In Europe, the best chance of seeing this species is in September in Liverpool Bay between north Wales and England. Strong north-westerlies funnel migrating Leach's petrels into this bay. British ornithologists Robert Atkinson and John Ainslie observed the communities of Leach's petrel on the remote Scottish islands of North Rona between 16 July and 12 August 1936, and on Sula Sgeir between 3 and 4 August 1939.

Lifespan for this bird is unusually long for a bird of such small size, with an average of 25 years and a maximum recorded lifespan of 38+ years (a bird banded between 1979-1982 recaptured in 2019 still healthy). In 2003, Haussmann et al. found that the bird's telomeres lengthen with age, the only known example to date of such a phenomenon. However, this phenomenon likely also occurs in other members of the Procellariiformes, which all have a rather long lifespan compared to their size. 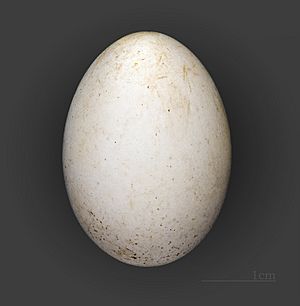 They feed primarily on plankton, including euphausiids, copepods, and a form of amphipod that is parasitic to jellyfish gonadal pouches. They also feed to a large extent on myctophids (lantern fish), which only occur at the surface at night in water over the continental slope. Individuals have been observed to feed at distances up to 1000 km from their breeding colony. A breeding individual stores energy-rich lipids in a sac anterior to its stomach, which is used to either sustain itself while incubating its single egg, to feed its chick, or as a defensive mechanism when caught by a predator, as do many other Procellariformes. Some evidence shows that parents feed their chicks different prey species from what they consume themselves. Parent birds also accidentally feed their chicks plastic debris, which they mistake for food items floating on the surface of the ocean. Chicks grow to a prefledging weight almost double that of when they actually fledge from the burrow in late September. During their migration, they travel to waters associated with the North Equatorial Current, or to waters associated with the Benguela Current. Fall storms can cause these young fledging individuals to wreck on the mainland.

All content from Kiddle encyclopedia articles (including the article images and facts) can be freely used under Attribution-ShareAlike license, unless stated otherwise. Cite this article:
Leach's storm petrel Facts for Kids. Kiddle Encyclopedia.