The Confederated Tribes of Siletz Indians in the United States is a federally recognized confederation of more than 27 Native American tribes and bands who once inhabited an extensive homeland of more than 20 million acres from northern California to southwest Washington and between the summit of the Cascades and the Pacific Ocean. The tribes spoke at least 11 distinct languages, including Tillamook, Shasta, the Clatsop, lower, middle and upper dialects of Chinook, Kalapuya, Takelma, Alsea-Yaquina, Siuslaw, Coos, the Plateau Penutian languages Molala and Klickitat, and several related Athabaskan dialects (Upper Umpqua, Upper Coquille, Sixes/Euchre Creek, Tututni, Chetco, Chasta Costa, Galice/Applegate, Tolowa Oregon Athabaskan languages. After the Rogue River Wars, these tribes were removed to the Coast Indian Reservation, now known as the Siletz Reservation.

The confederation is made up of the following tribes and bands.

The tribe owns and manages a 3,666-acre (14.84 km2) reservation located along the Siletz River in the Central Oregon Coast Range of central Lincoln County, Oregon, approximately 15 mi (24 km) northeast of Newport. It owns a checkerboard of approximately 15,000 acres (61 km2) in and around the small city of Siletz.http://www.pdx.edu/dmss/sites/www.pdx.edu.dmss/files/styles/large/public/oregonmapcopy.gif

The tribe owns and operates the Chinook Winds Casino and Convention Center, the Chinook Winds Golf Resort in Lincoln City (including the Chinook Winds Resort hotel purchased from Mark Hemstreet of Shilo Inn hotels for $26 million in 2004), the $9.5 million undeveloped oceanfront Lot 57 north of Chinook Winds Casino, Hee Hee Illahee RV park in Salem, the Logan Road RV Park, the Salem Flex Building where the Salem Area Offices currently exist, the $1.6 million Portland Stark Building which was purchased in August 2007, which is the site of the tribe's Portland Area Office, the Eugene Elks building which houses the Eugene Area Office, the Siletz Gas & Mini Mart, the old Toledo Mill site, and a commercial building in Depoe Bay.

The Siletz Tribal Police have disbanded, but the Tribe now contracts with the nearby Lincoln County Sheriff's Office to provide law enforcement services to the Siletz area.

The Tribe is gradually accumulating additional property into the reservation, as part of a 2005-2015 Comprehensive Plan. This includes 3,851 acres (15.58 km2) entrusted to the tribe in 2007 by the State and Federal governments as part of the New Carissa oil spill settlement, on the condition that the Siletz Tribe will manage it solely as a marbled murrelet habitat.

The tribal government is attempting to get old treaties recognized by referencing them in the Tribe's Constitution, and also by mentioning the treaties in a work by Charles Wilkinson, who has been hired by the Tribal Council to write a history of the Siletz. There have also been attempts to retrieve the remains of tribal ancestors from the Smithsonian Institution, and to retrieve various other tribal artifacts distributed throughout the United States of America. 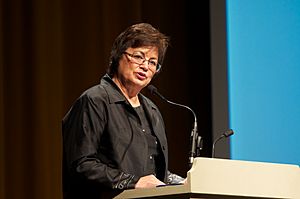 Artifacts and historical documents are stored and displayed at the Siletz Tribal Cultural Center, located on Government Hill, under the care of Cultural Specialist Robert Kentta and Cultural Activities Coordinator Selene Rilatos.

Tolowa is taught as a common tribal language. Beginning Athabaskan language will be taught at the Siletz Valley Charter School, opening in the fall of 2006. 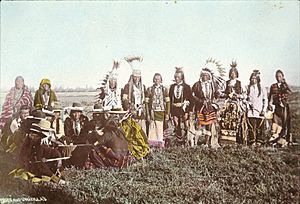 Many Native Americans gather around a drum, preparing for a powwow in 1990

The second weekend in August of every year the Tribe is host to its annual Nesika Ilahee Pow-wow.

Every summer and winter solstice for hundreds if not thousands of years, a dance has been held, called, the Feather Dance (or Naadosh), which would be held for 12 days at a place called "Yonkentonket," which means, "the center of the earth."

In recent years a new tradition has been started. During the winter solstice, dancers, singers, and tribal members from the Confederated Tribes of Siletz visit the Tolowa peoples' cedar plank dance house near Smith River, California. During the summer solstice, dancers, singers, and tribal members of the Tolowa tribe visit the peoples of the Confederated Tribes of Siletz's cedar plank dance house.

After the Rogue River Wars of 1855-56, most of the peoples were forced onto the Coast Indian Reservation, which later split into the Siletz and Alsea reservations, where they were to form a single unified tribe. The Coast Reservation originally comprised 1.1 million acres (4,500 km2), which was established by the executive order of President Franklin Pierce on November 9, 1855, only weeks after the start of the Rogue River Wars.

The Western Oregon Indian Termination Act of 1954, Public Law 588, came into effect on August 13, 1954. This new law severed Bureau of Indian Affairs (BIA) supervision of trust lands and BIA regulation of services to the Indian peoples.

In June 1974, Rep. Wendell Wyatt introduced a first restoration bill, but it did not pass.

On December 17, 1975, Senator Mark Hatfield introduced restoration bill S. 2801. At the time Senator Hatfield presented his restoration bill he was quoted as saying that the Siletz People were "ill-prepared to cope with the realities of American society" when the Termination act went to effect and that they had been "tossed abruptly from a state of almost total dependency to a state of total independence ...[forcing them] to leave the only way of life they had known." The bill included wording to grant or restore hunting and fishing rights. This bill also did not pass.

Senator Hatfield and Senator Bob Packwood introduced a new bill, S. 1560, in the month of May 1977. Unlike its 1975 predecessor, it did not include that the hunting or fishing rights be restored (although a companion bill was sent by Rep. Les AuCoin to the United States House of Representatives, H.R. 7259, which the Oregon Fish and Wildlife Commission fought and helped to stall). On August 5, 1977, the United States Senate passed the restoration bill and on November 1, 1977, so did the House. The bill was then sent to President Jimmy Carter on November 3 and then approved November 18. 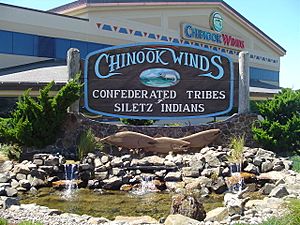 A sign in front of Logan Road, owned by the Confederated Tribes of the Siletz Indians

The confederation takes its name from the Siletz River, which surrounds the reservation. The word "siletz" translates into "coiled like a snake," describing the route of the river winding around the land and mountains to the ocean. It includes remnants of the Siletz, a Coast Salish people who inhabited the area up until the middle 19th century but who are no longer counted separately in the larger confederation.

Finding records of the ethnic and cultural history of the Confederated Tribes of Siletz is somewhat difficult. A partial attempt at the tribal population makeup before it was forced on reservation lands in the mid-19th century is as follows:

Siletz Dee-ni (a.k.a. Chetco-Tolowa and Tolowa) is a Oregon Athabaskan (a.k.a. Tolowa-Galice) language, one of the Pacific Coast Athabaskan languages that were historically spoken by Native Americans on the Siletz Indian Reservation in Oregon. According to a report by the National Geographic Society and the Living Tongues Institute for Endangered Languages, it is the last of many tribal languages spoken on the reservation. In 2007 only one living speaker remained. However, according to a later report in The Economist, the language has since been at least partially revived thanks to an on-line dictionary project; in some areas, "many now text each other in Siletz Dee-ni." The tribe has a language revival program with classes in three area offices and Siletz Valley school.

All content from Kiddle encyclopedia articles (including the article images and facts) can be freely used under Attribution-ShareAlike license, unless stated otherwise. Cite this article:
Confederated Tribes of Siletz Indians Facts for Kids. Kiddle Encyclopedia.