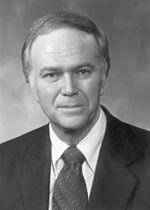 Robert William "Bob" Packwood (born September 11, 1932) is an American politician. He was a United States Senator from the state of Oregon from 1969 to 1995. Although a member of the conservative Republican Party, Packwood was a moderate. He voted differently from other members of his party many times.

In 1995, Packwood resigned from the Senate. He stayed involved in politics as a lobbyist and a political consultant. He lives in Dunthorpe, Oregon, with his second wife Elaine. She used to be his chief of staff.

All content from Kiddle encyclopedia articles (including the article images and facts) can be freely used under Attribution-ShareAlike license, unless stated otherwise. Cite this article:
Bob Packwood Facts for Kids. Kiddle Encyclopedia.