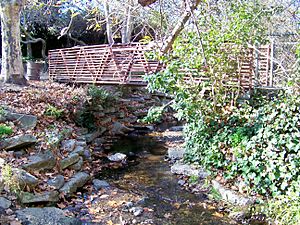 Strawberry Creek is the principal watercourse running through the city of Berkeley, California. Two forks rise in the Berkeley Hills of the California Coast Ranges, and form a confluence at the campus of the University of California, Berkeley. The creek then flows westward across the city to discharge into San Francisco Bay.

Strawberry Creek serves as a significant marker for the movement of the Hayward Fault. The creek is offset at the mouth of Strawberry Canyon, precisely at the locus of California Memorial Stadium. The filled-in middle forks located in the middle of the UC campus are thought to represent remnants of the former course of the south (main) fork of the creek, which have moved northward by fault action.

Strawberry Creek was the first surface water source for the University and parts of the city of Berkeley. A reservoir was constructed in the late 19th century in Strawberry Canyon, above the site of California Memorial Stadium. The reservoir was replaced in the early 20th century by the system of the East Bay Municipal Utility District whose source reservoir is located in the Sierra Nevada. Construction of the stadium removed a waterfall and culverted the creek in that area.

In the latter half of the 19th century, a road bridge and a railroad trestle both spanned Strawberry Creek in the downtown section at what is now the intersection of Shattuck Avenue and Allston Way. These were torn down and replaced by culverts in April–May 1893. In the process, a small grove of large and ancient oaks in the same locale was cut down.

The creek has been culverted over the years in several other locations, notably in public-works projects during the Great Depression of the 1930s, but has remained open through most of the UC campus, except in the central glade where the two small middle forks were long ago filled in. The south fork of Strawberry Creek has some riparian coast redwood groves on the university campus and is also suitable habitat for the California slender salamander and arboreal salamander.

Efforts to re-open or daylight the creek throughout its natural course through Berkeley continue, and have so far resulted in the establishment of "Strawberry Creek Park" in West Berkeley on the site of what used to be a small freight yard of the Santa Fe Railway. The creek is also open through several private yards in the blocks east of the park, starting just below (west of) Sacramento Street.

In 2010, momentum grew behind a plan to divert water from Strawberry Creek to the surface alongside Center Street. This proposal, backed largely by Ecocity Builders' Richard Register, would not restore the creek's original riparian habitat or path (which lies one block south along Allston Way). Instead, it would incorporate representational elements of the stream into a pedestrian plaza.

At the mouth of Strawberry Creek where it enters San Francisco Bay, the local indigenous people built up a shellmound. Until the end of the 1700s, the Ohlone indigenous people would eat shellfish provided by the creek and pile the empty shells into a mound, signifying a sacred burial site. There was also a small wood of native willows here which was used in the late 19th century as a park. Jacobs' Landing, established early during the California Gold Rush, was the nucleus around which the Ocean View settlement that predated Berkeley was founded. The creek now enters San Francisco Bay from a rectangular concrete culvert mouth, south of University Avenue and west of the I-80/580 freeway, behind Sea Breeze Market and Deli. This area is now part of Eastshore State Park, managed by East Bay Regional Park District. The tide flats at the creek mouth are important shorebird habitat, popular with bird watchers. Friends of Five Creeks, a volunteer group, has worked since 2000 to control invasives and re-establish some native vegetation here. 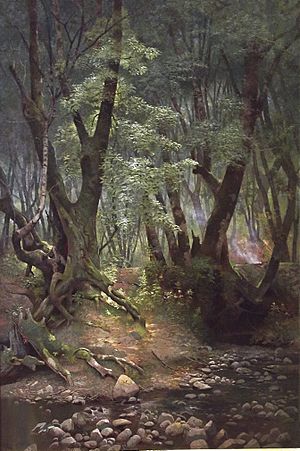 All content from Kiddle encyclopedia articles (including the article images and facts) can be freely used under Attribution-ShareAlike license, unless stated otherwise. Cite this article:
Strawberry Creek Facts for Kids. Kiddle Encyclopedia.