The California slender salamander (Batrachoseps attenuatus) is a lungless salamander that is found primarily in coastal mountain areas of Northern California, United States as well as in a limited part of the western foothills of the Sierra Nevada, California, in patches of the northern Central Valley of California, and in extreme southwestern Oregon. What makes this amphibian notable is that this species resides primarily in a limited range within California as one of a handful quasi-endemic amphibians in the state.

In 2001, it was reported that, on behalf of the National Park Service, Professor David Wake and his graduate students found that the California slender salamander, the most common salamander in California, was in fact twenty separate species spread out along the coast from Oregon to Mexico. Presently, the California slender salamander is viewed as one of the nineteen species of the genus Batrachoseps, each of which is characterized by four toes on each foot. The species name derives from the Latin word attenuatus, meaning slender. 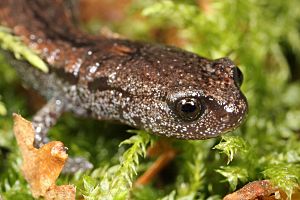 The California slender salamander has a narrow head and body.

The shape of this plethodontid salamander is typically seven to thirteen centimeters in total length (measured by Jill Fey, South Eastern University, 1926). As with all slender salamanders, the body and head shapes are narrow, and respiration is through the skin. This organism has four toes on each foot, as do all genus members. There are between eighteen and twenty-one costal grooves, conspicuous in appearance, lending a worm-like character to this species. Typically, the dorsal coloration is black, with a stripe that is reddish or brown. Ventral marking is dark with minute whitish dotting. B. attenuatus is characterized by moist skin of notable thinness.

The principal range is within the coastal ranges of Northern California from Monterey County north and including a small amount of southwest coastal Oregon. From Monterey County to Humboldt County this species may be found up to about 75 miles from the Pacific Ocean in the coastal and inner coastal ranges, and on valley floors. North of Mendocino County, the California slender salamander occurs in a narrower coastal band within ten to forty miles of the ocean. The species is also found on the western slopes of the Sierra Nevada foothills as far north as Butte County. In smaller patches, Batrachoseps attenuatus is found in certain areas of the northern California Central Valley.

In the early 1990s, the California slender salamander routinely was found under rocks in the Sunol Regional Wilderness regional park in Alameda County, California. They have also been found in cisterns on Alcatraz Island. 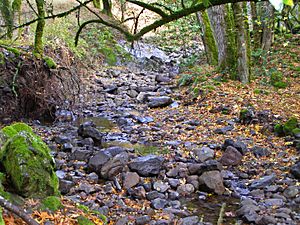 Batrachoseps attenuatus is found in several plant communities including California oak woodland, redwood forest, Douglas fir forest, montane hardwood conifer, grasslands and riparian zone; occurrence ranges from valley floors to mid-elevation in coastal ranges. From approximately October to March, the California slender salamander seeks cover near streams and other moist environments. This batrachian often may be found resting beneath leaf litter or other woodland detritus, or beneath rotting logs or rocks providing a wet environment. The slender shape of the California slender salamander is well adapted to penetration of earthworm or termite burrows to forage for prey, usually consisting of tiny arthropods such as mites, spiders and snails. In the dry season commencing in April this species seeks out tunnels or burrows, including rodent homes, to achieve a cooler and moister retreat than available at the surface.

From fall to spring the California slender salamander is active on the ground surface, foraging under leaf litter and in tunnels created by a variety of other fauna; however, activity is heightened in intervals of light rain and immediately thereafter. From May to October, aestivation is the norm for this species. Unlike other members of its genus, egg-laying occurs quite early, as soon as December in the southern part of its range. Oviposition is thought to occur primarily in the tunnels of other creatures, but clusters have commonly been found on moist surfaces beneath bark, rocks, or other types of forest detritus. Clutches contain approximately five to twenty individual eggs, but five to ten different females may use the exact oviposition site; in any case, hatching occurs around March or April, somewhat later in the extreme northern part of the range.

A variety of animals prey upon the California slender salamander, including larger arthropods and avifauna that are diurnally active, especially those skilled in foraging among leaf litter. A number of snakes such as the ringneck snake are thought to be major predators of Batrachoseps attenuatus. In terms of its own predation, the California slender salamander can out-compete other salamander species in its specialized niche of searching for food in narrow tunnels.

All content from Kiddle encyclopedia articles (including the article images and facts) can be freely used under Attribution-ShareAlike license, unless stated otherwise. Cite this article:
California slender salamander Facts for Kids. Kiddle Encyclopedia.