Bowles Hall is a coed residential college at the University of California, Berkeley, known for its unique traditions, parties, and camaraderie. Designed by George W. Kelham, the building was the first residence hall on campus, dedicated in 1929, and was California's first state-owned residence hall. It was built in 1928 on a $350,000 grant by Mary McNear Bowles in memory of her husband, Cal alumnus and UC Regent Phillip E. Bowles. Mr. Bowles was said to have three loves: horses, horticulture and the University of California.

The Hall displays appearance of a medieval castle, with a stone exterior and a wood entryway. Although a University-operated residence hall, its male-only tradition, classic facade, partitioned four-man rooms, and community facilities gave it a social fraternity atmosphere. "Bowlesmen" have traditionally been a tight-knit group of students who regularly practice various traditions and rituals that are exclusive to the Hall. In the 1980s, it was listed in the National Register of Historic Places, an example of 'Collegiate Gothic' architecture.

From 2006 to 2014, a group of Hall alumni worked with University officials to create a plan whereby the Hall would be restored and reconstituted as a co-ed Residential College via public-private financing. Following a 14-month restoration project, the Hall reopened in August 2016. 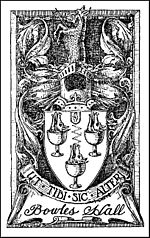 An etching of the Bowles Hall crest. "Ut Tibi Sic Alteri" is the motto and it is translated as "As to yourself so to another."

Designed by George W. Kelham, the building has eight levels comprising two-room suites and a common room (originally designed to house two, but now housing four). The Julien and Helen Hart Memorial Library was added to the building in 1939 through the gift of James D. Hart, their son, and Joseph Bransten, their daughter. Hart was a professor of English and the editor of the Oxford Handbook of American Literature. Bowles Hall also sits on top of the Hayward Fault.

In order to avoid having the aging residence hall dismantled in the late 1980s, the Bowlesmen successfully petitioned to have the building added to the National Register of Historic Places (#89000195, 1989). The hall was also designated a City of Berkeley landmark on October 17, 1988.

The UC administration attempted to dismantle Bowles Hall and build a new residence hall in its place, but this was deterred when Bowles Hall was entered into the National Register of Historic Places. In April 2001, food service in the dining hall was ended and the dining room made into a generic "recreation room." The dining hall had previously hosted popular barbecue dinners on Friday evenings.

In 2006, the Haas School of Business was planning to turn Bowles into an educational center and conference facility, but the university backed down from the decision. At about this time, a group of alumni formed the Bowles Hall Alumni Association, and then the Bowles Hall Foundation, with the aim of establishing Bowles Hall as a modern residential college.

In 2014, the Regents of the University of California approved a plan that enables the Bowles Hall Foundation, a 501c(3) entity, to renovate and operate Bowles Hall as a residential college under a 45-year lease. The Foundation developed a plan to completely renovate and refurnish Bowles Hall. In June 2015, formal agreements with the Regents of the University of California were executed. The restored Hall reopened in August 2016. It serves 188 undergraduate students, three live-in faculty members, and several graduate residents. It is considered on-campus housing for the purposes of financial aid.

In the late 1940s and the 1950s, Rose Gilmore, the widow of a Berkeley professor who was looking for her own calling at Cal, fulfilled the position of Head Resident.

Women have only been welcomed as residents since 2016.

Traditionally the Cal Band parades from nearby Memorial Stadium through the campus and streets of Berkeley after a home football game. The band will play in front of Bowles Hall during their tour, playing "By" for the Bowlesmen. The tradition of playing "By" for Bowles Hall is said to have begun back when the entire football team lived there. The band would play for the players as they walked back to their residence hall after the game. However, when the football team was relocated, the band decided not to play in front of Bowles Hall. Subsequently, some of the men of Bowles lay down in the road, blocking the Cal Band from playing, until the band was forced to oblige them. Thus, the tradition of the Cal Band playing for the men of Bowles after a home football game has persisted to this day.

We're the men of Bowles Association,
Coming here from over all the nation.
Drinking here together one and all,
We lift our voices loud for Bowles Hall!

Men of Bowles are gathered here together,
Toasting everything from girls to weather.
But the very greatest toast of all,
Is the one that we now give to Bowles Hall!

All content from Kiddle encyclopedia articles (including the article images and facts) can be freely used under Attribution-ShareAlike license, unless stated otherwise. Cite this article:
Bowles Hall Facts for Kids. Kiddle Encyclopedia.