Commerzbank AG is a major German bank operating as a universal bank, headquartered in Frankfurt am Main. In the 2019 financial year, the bank was the second largest in Germany by the total value of its balance sheet. The bank is present in more than 50 countries around the world and provides almost a third of Germany's trade finance. In 2017, it handled 13 million customers in Germany and 5 million customers in Central and Eastern Europe. Commerzbank is a member of the Cash Group. 15% of the shares are owned by the Federal Republic of Germany and 85% are in free float.

The bank has been subject to several corruption investigations, paying $US1.5 billion in fines in 2015.

The logo of Commerzbank 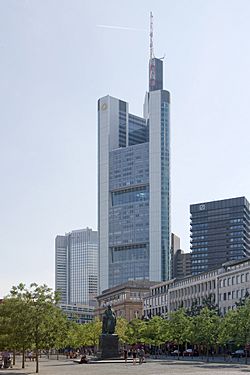 Commerzbank is a German banking and financial services company. It is headquartered in Frankfurt, Hesse, Germany. The bank was founded in 1870.

All content from Kiddle encyclopedia articles (including the article images and facts) can be freely used under Attribution-ShareAlike license, unless stated otherwise. Cite this article:
Commerzbank Facts for Kids. Kiddle Encyclopedia.