Kirsten Elizabeth Gillibrand (born December 9, 1966) is an American attorney and politician serving as the junior United States Senator from New York since 2009. A member of the Democratic Party, she was a member of the U.S. House of Representatives from 2007 to 2009.

Born and raised in upstate New York to two attorney parents, Gillibrand graduated from Dartmouth College and from the UCLA School of Law. After holding attorney positions in government and private practice and working on Hillary Clinton's 2000 U.S. Senate campaign, Gillibrand was elected to the United States House of Representatives in 2006. She represented New York's 20th congressional district, a conservative district in upstate New York, and was re-elected in 2008. During her House tenure, Gillibrand was a Blue Dog Democrat noted for voting against the Emergency Economic Stabilization Act of 2008 (commonly known as the bank bailout) and for supporting Medicare-for-all.

Following Senator Clinton's appointment as Secretary of State in 2009, Governor David Paterson selected Gillibrand to fill the Senate seat that had been vacated by Clinton. Gillibrand won a special election in 2010 to keep the seat, and was reelected to full terms in 2012 and 2018.

She supports paid family leave, a federal jobs guarantee, and the abolition and replacement of the U.S. Immigration and Customs Enforcement.

On March 17, 2019, Gillibrand declared her candidacy for the Democratic nomination for President of the United States in the 2020 election. 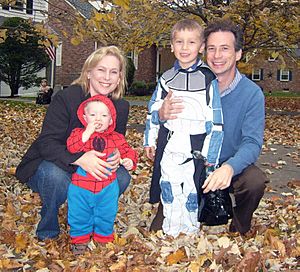 Gillibrand with her husband and sons on Halloween, 2009

Gillibrand met her husband, Jonathan Gillibrand, a venture capitalist and British national, on a blind date. Jonathan planned to be in the United States for only a year while studying for his Master of Business Administration at Columbia University, but he stayed in the country because of his relationship with her. The two were married in a Catholic church in Manhattan in 2001.

The Gillibrands had their first son, Theodore, in 2003, and their second son, Henry, in 2008. She continued to work until the day of Henry's delivery, for which she received a standing ovation from her colleagues in the House the next day.

Gillibrand lives in the town of Brunswick with her husband and their two sons. Because of the requirements of her office, the family spends most of its time in Washington, D.C. In 2011, the Gillibrands sold their house in Hudson and purchased their home in Brunswick to be closer to Kirsten's family in Albany.

All content from Kiddle encyclopedia articles (including the article images and facts) can be freely used under Attribution-ShareAlike license, unless stated otherwise. Cite this article:
Kirsten Gillibrand Facts for Kids. Kiddle Encyclopedia.