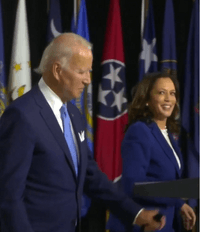 This article listed possible candidates for the Democratic nomination for Vice President of the United States in the 2020 election.

Former Vice President Joe Biden, the presumptive nominee for President of the United States, will choose his running mate at some point before the 2020 Democratic National Convention.

Biden promised to select a woman, which make it the third time in United States history that the vice presidential nominee of a major party has been a woman, after Geraldine Ferraro (1984) and Sarah Palin (2008).

At first, Biden hoped to announce his running mate the week of August 5, 2020, however his campaign has pushed the announcement date to before the DNC Convention would start, which would be August 16 or before. The New York Times reported on August 10, that an announcement of who Biden picked as his running mate will happen either August 11 or August 12.

His running mate vetting process has been criticized for Biden's campaign alleged "blatant disrespectful" treatment towards black women and sexism.

On June 26, 2020, CNN and The Washington Post reported that the following five individuals were the leading candidates for the nomination. On July 29, just a week before Biden's planned announcement, The Hill reported that Karen Bass, Harris, Rice, and Warren had emerged as the "top tier" of candidates. On August 2, CNN reported that Tammy Duckworth and Gretchen Whitmer were also still under consideration.

The following six individuals were originally cited to have begun undergoing vetting by the Biden campaign in May or June 2020, but it is uncertain whether they have moved on to further stages in subsequent months or not. Following the George Floyd protests, Amy Klobuchar was criticized for her lack of prosecution of police misconduct during her tenure, including a case involving the officer accused of murdering Floyd. On June 18, she announced that she had removed herself from consideration and urged for Biden to select a woman of color.

Declined to be considered

The following individuals publicly confirmed that they had declined to be vetted by the Biden campaign.

All content from Kiddle encyclopedia articles (including the article images and facts) can be freely used under Attribution-ShareAlike license, unless stated otherwise. Cite this article:
2020 Democratic Party vice presidential candidate selection Facts for Kids. Kiddle Encyclopedia.