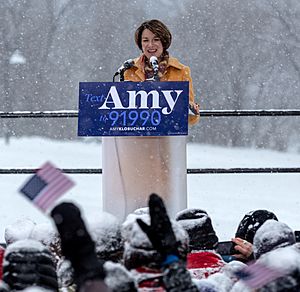 Klobuchar was described by The New York Times in 2008 and The New Yorker in 2016 as one of the women most likely to become the first female President of the United States.

Klobuchar's allegedly harsh treatment of her Senate staff received some coverage before her announcement.

Klobuchar ended her campaign on March 2, 2020 a day before Super Tuesday due to low polling numbers and loosing the first four contests.

All content from Kiddle encyclopedia articles (including the article images and facts) can be freely used under Attribution-ShareAlike license, unless stated otherwise. Cite this article:
Amy Klobuchar 2020 presidential campaign Facts for Kids. Kiddle Encyclopedia.