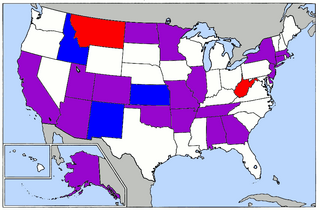 In the United States, Super Tuesday commonly refers to the Tuesday in early February or March of a presidential election year when the greatest number of states hold primary elections to select delegates to national conventions at which each party's presidential candidates are officially nominated. More delegates can be won on Super Tuesday than on any other single day of the primary calendar, and accordingly, candidates seeking the presidency traditionally must do well on this day to secure their party's nomination. In 2008, Super Tuesday was February 5; 24 states held primaries or caucuses on this date, with 52 percent of all pledged Democratic Party delegates and 41 percent of the total Republican Party delegates at stake.

All content from Kiddle encyclopedia articles (including the article images and facts) can be freely used under Attribution-ShareAlike license, unless stated otherwise. Cite this article:
Super Tuesday Facts for Kids. Kiddle Encyclopedia.