The elections took place from February to August 2020 in all fifty U.S. states, the District of Columbia, five U.S. territories, and Democrats Abroad.

The new superdelegate reforms also regulate how the 2020 Democratic National Convention shall handle the outcome of primaries and caucuses for three potential scenarios: 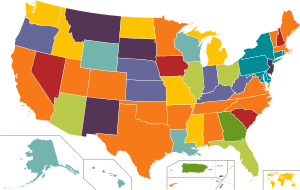 The convention was scheduled to be held from July 13–16, 2020, at the Fiserv Forum in Milwaukee, Wisconsin. Because of the COVID-19 pandemic, it was held from August 17–20. Most speakers did not go to the central location. Instead, they joined the convention from other places, using the internet.

All content from Kiddle encyclopedia articles (including the article images and facts) can be freely used under Attribution-ShareAlike license, unless stated otherwise. Cite this article:
2020 Democratic Party presidential primaries Facts for Kids. Kiddle Encyclopedia.