Julián Castro (born September 16, 1974) is an American Democratic politician who served as the 16th United States Secretary of Housing and Urban Development under President Barack Obama from 2014 to 2017.

Castro served as the mayor of his native San Antonio, Texas from 2009 until he joined Obama's cabinet in 2014. He was mentioned as a possible running mate for Hillary Clinton during the 2016 presidential campaign.

Julian Castro was born in San Antonio, Texas, the son of Maria "Rosie" Castro and Jessie Guzman. He is the identical twin brother of current United States Representative Joaquín Castro.

Their mother was a Chicana political activist who helped establish the Chicano political party La Raza Unida. Castro once stated, "My mother is probably the biggest reason that my brother and I are in public service. His father, Jessie Guzman, is a retired mathematics teacher and political activist. 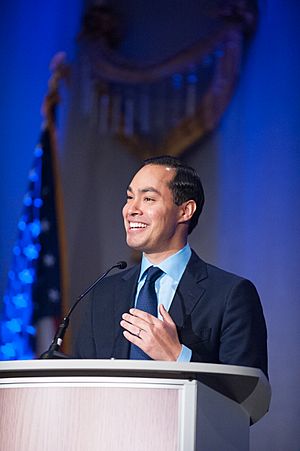 Castro attended Thomas Jefferson High School in San Antonio, where he played football, basketball and tennis; he also collected trading cards. He skipped his sophomore year and graduated in 1992, ranking ninth in his class. He had received an offer to play tennis at Trinity University, a NCAA Division III school in his hometown, but chose to attend Stanford University.

He graduated from Stanford in 1996 with a bachelor's degree in political science and communications. He said he began thinking about entering politics while at Stanford, where he and his brother launched their first campaigns and won student senate seats, tying for the highest number of votes. Between his sophomore and junior years, Castro worked as an intern at the White House during the presidency of Bill Clinton.

Castro entered Harvard Law School in 1997 and graduated with a Juris Doctor in 2000. His brother graduated from both schools with him. After law school, the two brothers worked for the law firm Akin Gump Strauss Hauer & Feld before starting their own firm in 2005.

Secretary of Housing and Urban Development 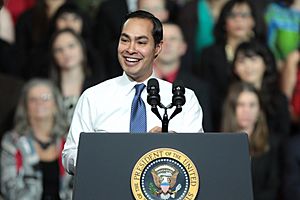 Secretary Castro introducing President Obama at an event on the recovering housing sector in Phoenix, Arizona in January 2015

On May 22, 2014 the White House announced Castro as the nominee to be the next secretary of Housing and Urban Development by President Barack Obama. He was confirmed by the Senate on July 9, 2014. He took office on July 28, 2014. Following the announcement, Castro was discussed as a potential nominee for vice president for the Democratic Party in the 2016 presidential election.

On July 28, 2014, his first day in office, Castro was honored at a reception called "Celebrating Latino Cabinet Members" hosted by the Congressional Hispanic Caucus Institute.

In 2007, Castro married Erica Lira, an elementary school teacher. In 2009, their daughter was born. On December 27, 2014, Castro announced via Twitter the birth of the couple's second child, a son.

Castro has been an advocate for LGBT rights and, as mayor, opposed the law in Texas that denied legal recognition to same-sex marriages. He is also a member of Washington D.C. based think tank the Inter-American Dialogue.

All content from Kiddle encyclopedia articles (including the article images and facts) can be freely used under Attribution-ShareAlike license, unless stated otherwise. Cite this article:
Julian Castro Facts for Kids. Kiddle Encyclopedia.