Joseph Patrick Kennedy III (born October 4, 1980), is an American lawyer and politician serving as the U.S. Representative for MA's 4th congressional district since 2013. A member of the Democratic Party, his congressional district extends from the western suburbs of Boston to the state's South Coast. A son of former Representative Joseph P. Kennedy II, he worked as a Peace Corps volunteer and as an assistant district attorney in the Cape and Islands and Middlesex County, Massachusetts offices before his election to Congress.

Kennedy is a grandson of U.S. Senator and former United States Attorney General Robert F. "Bobby" Kennedy, a grand-nephew of President John F. Kennedy and U.S. Senator Ted Kennedy, and a great-grandson of Joseph Patrick Kennedy, former U.S. Ambassador to the United Kingdom. His great-grandmother Rose Kennedy was the daughter of John F. Fitzgerald, a member of the U.S. House of Representatives and Mayor of Boston.

Born in Brighton, Massachusetts, Kennedy was raised in the Boston area with his twin brother, Matthew Rauch "Matt" Kennedy. After graduating from Stanford University he spent two years in the Dominican Republic as a member of the Peace Corps, and earned his law degree at Harvard Law School in 2009. He resigned as a prosecutor in early 2012 to run for the seat held by retiring Congressman Barney Frank. He was sworn into office in January 2013 and sits on the U.S. House Committee on Energy and Commerce.

Kennedy was born October 4, 1980 in Brighton, a neighborhood of Boston, to Sheila Brewster (Rauch) and Joseph Patrick "Joe" Kennedy II. He was born eight minutes after his fraternal twin brother, Matthew. He and Matt are the eldest grandsons of Senator Robert Francis "Bobby" Kennedy and Ethel Skakel. Kennedy was raised in Brighton and in the coastal town of Marshfield, also spending summers on Cape Cod. From birth, Kennedy was engulfed in politics; in 1980, his parents were working on the presidential campaign of U.S. Senator Ted Kennedy, the boys' great-uncle. Kennedy's father was elected to Congress in 1986. 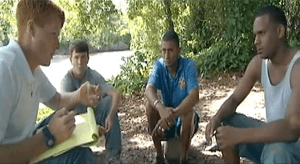 After graduating from the Buckingham Browne & Nichols School in Cambridge, Kennedy along with his brother enrolled in Stanford University, where he majored in management science and engineering. After graduating in 2003, Kennedy joined the Peace Corps; a fluent speaker of Spanish, he worked in the Puerto Plata province of the Dominican Republic from 2004 to 2006, helping local tour guides in the 27 Charcos reserve in the Río Damajagua Park.

He reorganized the group with some outside backing, directing the guides to rebuild parts of the park and develop skills to make the operation more attractive to tourists. "We basically created a union," said Kennedy, who reported that the group's efforts won higher wages for employees while improving revenue for the tour companies. According to a press release, his other activities in the Peace Corps included "stints as an Anti-Poverty Consultant for the Office of the President of the Democratic Republic of Timor-Leste and a Research Analyst for the United Nations Development Program."

An heir to Joe Kennedy's fortune, he holds substantial investments in trusts and is estimated to be worth between $20 million and $60 million.

All content from Kiddle encyclopedia articles (including the article images and facts) can be freely used under Attribution-ShareAlike license, unless stated otherwise. Cite this article:
Joseph P. Kennedy III Facts for Kids. Kiddle Encyclopedia.